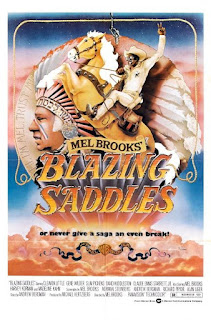 1974 was a great year for Mel Brooks.  Young Frankenstein was a major hit and was a parody of the Universal horror films, and the Frankenstein series in particular.  However, it kept the atmosphere of those films and, despite being a comedy, finally wrapped up the series and achieved the goal that Dr. Frankenstein had wanted from the beginning, which was to animate a perfectly normal human being.  The same year Brooks also made Blazing Saddles which, while famously a satire of racism, also managed to be one of the last great westerns as well.
When black railroad worker Bart (Cleavon Little) gets fed up with the racial attitudes of his boss Taggart (Slim Pickens) he is sentenced to be hung by the state's attorney general, Hedley Lamarr (Harvey Korman).  Because of an unforeseen problem the railroad is forced to make a detour through the town of Rock Ridge, and Lamarr realizes the value of the land is about to increase.  In an effort to scare off the residents of Rock Ridge Taggart raids the town, but they decide to stay.  As a plan B Lamarr encourages Governor Lepetomane (Mel Brooks) to appoint Bart as the new sheriff of Rock Ridge, figuring the backwards citizens of the town will kill him and, with no law enforcement, the town will evaporate.
The plan almost works, except for Bart decides to actually do the job and finds a ready ally in former gunslinger Jim (Gene Wilder).  He begins to win over the town by holding the railroad and Lamarr at bay and, with everyone working together, comes up with a plan to keep Lamarr from grabbing the land around Rock Ridge.
Like the best of Brooks's films, giving a summary without the jokes makes it sound better than most of the movies it is satirizing.  That is quite true; if he decided to make this a serious film about a black sheriff gaining acceptance of a frontier town as they both face a corrupt politician and his lackeys this would have been a sure-fire hit, especially given the performances of Little, Korman and Wilder.  That Brooks worked on the script with comedian Richard Pryor and made it a film that laughs in the face of racism while incorporating flatulence jokes and Looney Tunes style humor just makes it so much better.
This is one of the most reacted-to movies on YouTube, probably with the assumption that Millennials and Generation Z will practically explode from being triggered by the humor.  However, the intent of the movie is so upfront that, although there is no question that a movie like this could not be made these days, Brooks and Pryor made sure anyone with half a brain would understand the point of the film.  The reason it couldn't be made today has nothing to do with the humor or the use of a certain word throughout, but because no one currently knows how to do this type of comedy at this point, and would turn it into a sociology lecture rather than a satire.  As for that word there would be so much emphasis on it, from the film makers to the press, that it would mainly attract those who want a free pass at saying it by quoting the film.  It is one of the main reasons other genres have had to carry comedy for decades now as it seems the art of making a comedy film is long forgotten.
In fact, if Brooks had listened to Warner Bros. executives the movie would never have ended up in theaters in the form we know.  He wisely made sure he had the right to make the final cut, taking that power away from those who had no idea what he was doing.  He and Pryor managed to fight against racial attitudes with humor and it was a rare time that white audiences, who had somewhat embraced black cinema at the time, were willing to listen to what was being said behind the jokes.
The only context of "those days" is that it seems we missed a point in American history where things started to slightly improve when it came to reconciliation between white and black Americans, and this a relic of that time.  Mel Brooks managed to make one of the best comedies, best westerns and best anti-racism films all in one without lecturing or appearing that he was above it all, and it worked with audiences then and still works with audiences today.  It amazed me how much I still laughed at this after the number of times I have sat through this movie and I sincerely wish the progress that our country had made, that is reflected here, had continued.
Blazing Saddles (1974)
Time: 93 minutes
Starring: Cleavon Little, Gene Wilder, Harvey Korman, Slim Pickens, Mel Brooks
Director: Mel Brooks