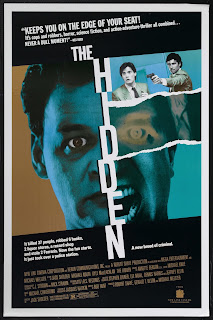 If there is one thing David Cronenberg knew it's that the idea of things invading their bodies make humans quite uncomfortable.  His entire first movie, Shivers, dealt with just such a thing.  It's a sure-fire way to make audiences squirm in their seats while not breaking the budget, since all that's needed for the creature is something that looks fittingly disgusting.  Show the slug or whatever doing its thing once or twice and everyone gets the point.
I know there was at least one book written prior to The Hidden, and I also know there were Star Trek episodes that featured microbes controlling people.  Largely writer Jim Kouf took those existing ideas and mixed a bit of Shivers in with it, throwing in some of the weird humor of other '80s alien invasion films such as Critters.  The 1980s was also the height of the buddy cop movie phase, so that became a major part of the movie as well.  For director Jack Sholder The Hidden was also pretty much his chance to redeem himself after almost bringing the fledgling A Nightmare on Elm Street series to an end with his mediocre sequel, Freddy's Revenge.
When a man named Jack DeVries (Chris Mulkey) with no prior criminal history suddenly goes on a killing spree, robs a bank and leads police on a high-speed chase through Los Angeles, homicide detective Tom Beck (Michael Nouri) is confused but relieved when they take him out.  However, the arrival of an FBI agent named Lloyd Gallagher (Kyle MacLachlan), who insists that the spree isn't over, complicates things.  At first Beck does not believe Gallagher that Jonathan Miller (William Boyett), DeVries's roommate at the hospital, is now a threat, but soon the killings begin again.
When a stripper named Brenda (Claudia Christian) and others show the same behavior Beck confronts Gallagher - especially since it turns out that the FBI agent may be more than he claims to be.  It seems that the driving force behind the killings, a parasitic creature that uses up the bodies of those it inhabits, is responsible for the deaths of people Gallagher loved, and may be done randomly entertaining himself as he seeks to gain access to a popular senator (John McCann) who is planning a presidential run.
This is not a movie that makes its audience wait for the story to begin.  The bank robbery happens right as the credits end, followed by a number of random murders and the police chase.  For the most part Sholder keeps The Hidden on track, including a glimpse into Beck's home life (which, thankfully, never becomes a target for the creature).  There are occasional parts where it drags a little, but wait long enough and something crazy happens.  Since the producers didn't have to waste a lot of money on creature effects - we see the creature transfer between DeVries and Miller, the other times are left to imagination - Sholder could concentrate on stunts and various action scenes.
The other thing I thought The Hidden did right was not follow a lot of the clichés of buddy movies.  Beck has a stable home life and has a reputation for being a good police officer rather than a superhero.  He is fallible and logical, but willing to believe in what is going on once the facts are present.  Michael Nouri does a good job portraying him, and supposedly was up for the part of Riggs in Lethal Weapon.  He chose to do this movie instead, and probably good that he did, because he seems more believable as a grounded detective rather than an oddball.  MacLachlan is oddball enough, and obviously his time working with David Lynch helped him play Gallagher as being slightly different.
Though the movie barely made about twice its budget back it has, over the years, become a highly influential cult movie.  It was nice seeing a cleaned-up version, as older video copies had both picture and sound issues, but the current DVD and BluRay versions about as good as they get, so those interested in seeing where everything from those worms in the exploding head episode of Star Trek: The Next Generation, to the Trill from the same and the Goa'uld from Stargate, they're almost all modeled from this.  Unfortunately most of them look like Cronenberg's little rubber things rather than the creature that emerges from DeVries, but the idea is the same, whether they are good guys or bad guys.
In typical fashion what reputation the movie had was tarnished by a bad direct-to-video sequel in the 1990s, but this is the perfect movie if someone is wanting to catch one of those '80s gems that got left behind.  It's got a wicked sense of humor, plenty of action and a pre-Babylon Five Claudia Christian in a get-up I doubt would be street legal even now.  There is even Danny Trejo popping up briefly as an inmate in the station's jail and Lin Shaye, the old lady from the Insidious series, in an early role as Beck's wife.  There is also a hidden body count meter throughout the movie, so keep an eye on the numbers that pop up throughout the movie.  It's rare that something this fun and clever hits theaters, and it's just a shame it didn't do better at the time.
The Hidden (1987)
Time: 97 minutes
Starring: Kyle MacLachlan, Michael Nouri, Chris Mulkey, William Boyett, Claudia Christian
Director: Jack Sholder