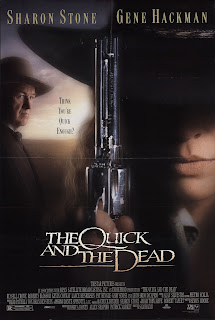 Sam Raimi was one of my favorite directors, and I guess he still is in many ways.  His early films showed a lot of innovation, often working on a shoestring budget but, at the same time, inventing techniques to make it look like there was much more behind it.  There are a lot of camera tricks done today that he invented, from the famous steady-cam shots from the demons' point of view in the Evil Dead films to following objects as they fly through the air.  There was a time one knew what to expect from a Sam Raimi film, and even then he would come up with something completely new.
The Quick and the Dead came out two years after Army of Darkness, one of Raimi's best films, and I was excited at the time to see what he would do with westerns.  I did have some concerns going into it, however.  I noticed right off that he and his brother Ivan did not have writing credits on this.  Part of the charm of Raimi's films is he writes as frenetically as he directs, often making sure his actors and his lines match the comic book sensibilities of his films.  It was something that, surprisingly, often worked; Spider-Man 3 was probably the only time it didn't, and that's because Raimi's style didn't mesh with a film that had already been over-interfered with by the studio.
The script is credited to Simon Moore, who appears to mainly write for television and children's programs.  Despite this, from all accounts, Sharon Stone and Sam Raimi had much to do with how the final movie came out, with John Sayles rewriting a good portion although he doesn't receive a credit.  While we may not get Raimi's insane dialogue, however, we still get his direction.
The Lady (Stone) comes to the town of Redemption where a quick-draw contest is being held by John Herod (Gene Hackman), an outlaw that has taken over the community and become rich living off the share he takes from their incomes.  One of those who has entered the contest is his own son, known as the Kid (Leonard DiCaprio), who is anxious to come out of his father's shadow.  An unwilling participant is Cort (Russell Crowe), a former member of Herod's gang that has become a man of the cloth. As the story progresses and the contestants dwindle the reasons for the Lady coming to town become apparent.
From the cinematography to Alan Silvestri's score to Sharon Stone doing her best to channel Clint Eastwood it is quite obvious that both Raimi and Stone are trying to make a modern Spaghetti Western.  A lot of the other westerns being made about the same time were attempts to revise the John Ford style, but Raimi was happy to go headlong into Leone territory.  The reason I say both is that, rather than being something Raimi developed organically, this was Stone's vanity project, and she chose Raimi to direct it based on her enjoyment of his earlier movies.  It contains many of the directing tricks he used in the Evil Dead films and Darkman while incorporating some stylistic tributes to The Good, the Bad and the Ugly and High Noon.
Unlike most vanity projects this doesn't try to be too complex.  It's a simple revenge story with stylized gunfights, giving Raimi the freedom to do what he wants while letting Stone play out her own gunfighter fantasy.  It also lets Gene Hackman, who was the main villain in Clint Eastwood's Unforgiven just a few years prior, play a similar but highly exaggerated role.  John Herod is evil almost to the point of being comical, but Hackman manages to keep it from going off the rails.
This is Russell Crowe's first starring role in a Hollywood film and he acquits himself well, even if his true accent pops out every now and then.  Given what Leonardo DiCaprio has achieved over the years it is strange seeing him pretty much billed last, after older western actors like Woody Strode (who makes his last film appearance here as the undertaker) and popular character actors such as Lance Henriksen and Tobin Bell.  At the time I wrote him off as a pretty boy meant to entertain teenage girls until his inevitable fade from glory as the next big thing arrived, but some of what he would do to prove me (and others) wrong is already evident here.
The Quick and the Dead in no way rewrites the western or does anything new with it, but it does let a great bunch of actors to get together and have some fun.  It's also one of the last Sam Raimi films directed in his old style.  Although it would show up occasionally, such as in Drag Me to Hell, by the time he adapted the novel A Simple Plan for his next movie it had become obvious that he was transitioning to doing more traditional Hollywood film making.  The critics hated this movie at the time but, along with Tombstone, it has weathered the test of time better than a lot of prestige productions made at the same time, and is worth seeing just for the sheer fun.
The Quick and the Dead (1995)
Time: 107 minutes
Starring: Sharon Stone, Russell Crowe, Leonardo DiCaprio, Gene Hackman
Director: Sam Raimi