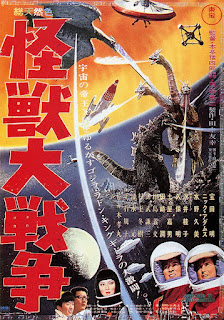 From the time Toho decided to bring back their most famous movie monster with King Kong vs. Godzilla - in fact, even before that with Mothra - the kaiju kingdom was ruled by director Ishirô Honda, special effects supervisor Eiji Tsuburaya and screenwriter Shin'ichi Sekizawa.  They, and often a rotating team of many of the same actors from the first Godzilla forward, brought us ever-evolving special effects and made Toho's menagerie of creatures one of the most famous in cinematic history.
All good things, as usual, must come to an end.  Invasion of Astro-Monster saw Honda's contract reach its end with Toho, which allowed him to do other things than monster films.  Tsuburaya was a big enough name that he could open his own special effects workshop, ultimately helping to create the Ultraman television shows.  Sekizawa ended up still working on a lot of the scripts for these types of films even though after this one the enjoyment began to run out - not because this was a bad or disappointing film, but just because it was time to do something new, even if Toho insisted he keep going back to the well.
Although none of the characters return from Ghidorah, the Three-Headed Monster, this is still a direct sequel.  Ghidorah was defeated, but not killed, at the end, and Godzilla and Rodan, despite not really caring about what happened to humanity, nevertheless joined with Mothra to get rid of him.  Everything at the end of that movie was left open.  Despite introducing such a strong and unique monster as King Ghidorah the movie, at Toho's insistence, Honda's disappointment and Tsuburaya's glee, had more moments of light humor than previously.
Invasion of Astro-Monster takes place sometime afterward, with a joint U.S. - Japanese mission to Planet X, a newly discovered world near enough to Jupiter to almost be one of its moons, but usually hidden by the bigger planet and hard to spot due to a low albedo.  The two astronauts, Glenn (Nick Adams) and Fuji (Akira Takarada), find that Planet X is inhabited by a race called the Xiliens who are led by the Commandant (Yoshio Tsuchiya).  Planet X, it seems, is the new target of King Ghidorah, and the Xiliens offer to trade a cure for cancer to borrow Godzilla and Rodan to help them deal with the threat.
Earth eventually agrees and the monsters are transported to Planet X.  Meanwhile, Fuji is dealing with his sister Haruno (Keiko Sawai) who is set on marrying what he considers a crackpot inventor named Tetsuo (Akira Kubo).  Tetsuo has created what is a loud annoying alarm and, much to Fuji's surprise, it is purchased by a corporation represented by a lady named Namikawa (Kumi Mizuno), who also becomes Nick's lover upon their return.  Unfortunately, rather than prove to be peaceful, the Xiliens have other reasons for wanting control of Earth's monsters, and it soon falls to Fuji to find a way to stop them.
Until now I had only seen the American version of this, Monster Zero, which was not released until 1970 and was one of the most famous entries on Mystery Science Theater 3000.  Although the American version is recut and has horrible dubbing I never thought it to be that bad of a "heroic" Godzilla film.  Obviously Honda didn't think it was that terrible of an idea either as many elements were reused for his return to the series, 1968's Destroy All Monsters, and Toho again reused some of the plot in the 1990s with Godzilla vs. King Ghidorah.   Without the dubbing (except for Nick Adams being dubbed in Japanese) a lot of the cheese factor - despite the comical Xilien costumes - vanishes.  In its original Japanese form Invasion of Astro-Monster is a well-done '60s sci-fi flick, and even the science portion isn't as bad as other entries in the series.
The part that will disappoint a lot of Godzilla fans is that, even though he and Rodan are in it and again fighting King Ghidorah, they are pretty much secondary to everything else going on.  It's an alien invasion film rather than a kaiju film.  It has Godzilla's famous "victory dance" on Planet X and then a brief but satisfying battle at the end, but that is really about it.  They are so secondary that a number of the scenes of destruction are lifted from other Godzilla films and from the 1956 film Rodan.  In total there is about three minutes of stock footage taken from the previous films.  Audiences noticed and were disappointed, but this unfortunately would become a trend as the Showa era continued.
Despite that I have to say that I like this film better than its predecessor, at least in its original form.  The cheesier parts move into camp rather than cringe, and it is weird to see one of these films so focused on the human characters.  I have found that many of them in this series have had a lot more story going on besides the monsters than I remember, but this one especially has good performances throughout and Sekizawa lets his imagination run wild a bit, trying hard not to retread well-worn territory.
Invasion of Astro-Monster (1965)
Time: 93 minutes
Starring: Akira Takarada, Nick Adams, Akira Kubo, Keiko Sawai, Yoshio Tsuchiya, Kumi Mizuno
Director: Ishirô Honda