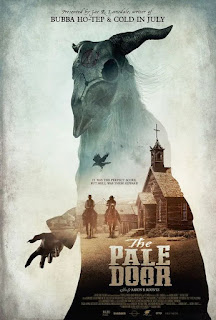 One would think westerns and horror would go well together.  The Native Americans themselves have plenty of stories about what may lurk in the deserts and forests of North America, of untold spirits of beasts and men.  Writers such as Zane Grey have come up with some pretty good western ghost stories.  One of the best western songs, "(Ghost) Riders in the Sky", has phantom cowboys driving hell's herd of cattle, and it is not too hard to imagine tales of ghostly horses and lost riders and such.
Unfortunately, though the terrain and the sheer isolation of parts of the American West lend themselves to tales of the supernatural, Hollywood has never got it right.  Instead of the restless spirits of gunfighters still roaming their old haunts or pale riders heralding doom, we instead get zombies and vampires and such - and at budgets that seem below those of the studios that used to churn cheap westerns out by the dozen nearly a century ago.  Unfortunately, The Pale Door, with one of those "presenting" credits that should be a major warning, is no different.
Duncan Dalton (Zachary Knighton) leads an outlaw gang while his younger brother Jake (Devin Druid) tries to earn an honest living working in a saloon.  Jake is saving up to buy back the family farm which was lost when they were children and their parents were murdered.  Duncan's gang is planning a train robbery and happen to be down a man and Jake, wanting to prove himself to his brother, asks to come along.
Instead of the gold they are expecting they find a locked crate in which, upon opening, they find Pearl (Natasha Bassett).  Duncan is shot during the robbery and Pearl tells them if she is returned to her home town he will be taken care of and the men will be rewarded.  It turns out that she is the daughter of Maria (Melora Walters), the owner of a brothel in the town of Potemkin.  At first the men are enjoying themselves, but it soon turns out that Maria, Pearl and the rest are witches seeking male blood with which to sustain them.
This was written by Keith Lansdale, Joe R. Lansdale's son, and director Aaron Koontz, so largely the "presented by" heading (other than disingenuously mentioning Bubba Ho-Tep) is a favor from Daddy.  If Daddy really wanted to do a favor, however, he would have told his son to scrap this and try again.  It's basically From Dusk Till Dawn with witches instead of vampires, and with dull characters and nonsensical scenes rather than fun characters and great action.  To make matters worse it is done on a budget below that of the average '90s Full Moon or Troma film, both studios that could have at least made something passable even if nothing could really save the rote, rehashed story line.
Whoever they have doing makeup and gore effects, at least, knows what they're doing, and most of that is done with practical effects.  Too bad their skills were wasted here.  The witches themselves, in their true form, are CGI creations, allowing Koontz to do the usual "scary" thing of having strange creatures crawl across the ceiling.  Even worse, though they all have burns due to being put to the stake, all have features straight out of The Witches of all movies.  It's hard to be frightening when pulling from a dark young adult comedy.  Then again I should have known what I was getting into when the opening credits looked like something that would have been on an emo kid's MySpace page in 2007.
This is one of those bad movies that should just be ignored.  There is nothing that transcends into camp or anything enjoyable.  It is simply once again going through the motions, checking off boxes for both the western and horror genres, replete with b-tier actors and z-tier direction.
The Pale Door (2020)
Time: 96 minutes
Starring: Zachary Knighton, Devin Druid, Stan Shaw, Melora Walters, Natasha Bennett
Director: Aaron Koontz