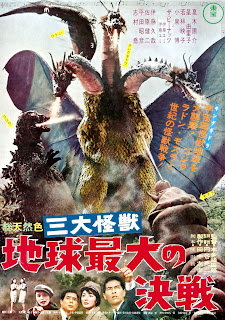 Akira Kurosawa, Toho's prestige director and one of their big moneymakers, failed to deliver his new film Red Beard for the end of of 1964.  Thus, instead of one Godzilla film, Japan was blessed with two that year.  They also got a bonus: not only was Ghidorah, the Three-Headed Monster a direct sequel to Mothra vs. Godzilla, but it was also a roundabout sequel to 1956's Rodan.  Directed by Ishiro Honda, with Eiji Tsubaraya as usual doing the effects work, Rodan was a step forward in the visual department and was notable for being the first kaiju movie in color.
To bring everything up to speed, Rodan and his mate were giant pterodactyls.  Instead of atomic breath they used their supersonic speed as well as their ability to build up gusts of wind to make a mess of parts of Japan.  In the end, after his mate is killed, the male Rodan flies into a volcano and is presumed dead.  Meanwhile, Godzilla was defeated by the two offspring of Mothra after she exerted the last of her energy fighting the big lizard.  They were successful in driving him away, although he was not killed in the end, but instead headed out to sea.  The two Mothras returned with the Fairies (Emi and Yumi Ito) to Infant Island to live out their lives until next needed.
Some time following those events we find the world in the midst of strange happenings.  Japan is experiencing summer temperatures in January.  Journalist Naoko Shindo (Yuriko Hoshi) is tasked with interviewing an expert on aliens (Somesho Matsumoto) regarding the strange events, and he claims that he needs to contact UFOs to figure out what is going on.  While he doesn't reach any aliens, a sudden strange meteor shower occurs which is visible around he world.  Just as this is happening Princess Selina Salno of Sergina (Akiko Wakabayashi) narrowly escapes assassination when she hears voices that encourage her to jump from a plane.
Naoko's brother (Yosuke Natsuki) was assigned to be the Princess's bodyguard but is taken off the assignment once her death is announced.  However, a strange prophet claiming to be from Venus suddenly shows up warning about danger to the Earth.  While Naoko tries to get the story her brother realizes the prophet looks quite similar to the Princess.  The would-be assassin, Malmess (Hisaya Ito), is also concerned she may have survived and arrives in Japan to finish the job.  Meanwhile, her warnings about the return of Rodan (Masaki Shinohara) and Godzilla (Haruo Nakajima) come true, and she has another dire warning: a creature called King Ghidorah (Shoichi Hirose), who destroyed the Venusian civilization, has arrived on Earth to do the same.  Only by combining the forces of Godzilla, Rodan and the surviving Mothra offspring (Katsumi Tezuka) can the new monster be defeated.
King Ghidorah has always been one of my favorite Toho monsters, and thankfully throughout the different versions of Godzilla films he has always remained a villain.  His emergence is also one of the best scenes, with explosions of fire and energy resulting in the monster coalescing from thin air.  Unfortunately it is one of the few times when the wires holding the suit up can also be seen clearly, but it is well-done none-the-less.
As great a monster as Ghidorah is he unfortunately arrives at a time when the monsters in these movies started becoming too human, and much too silly as well.  Strange thing since there is a lot of human drama in this one, as well as some international intrigue, but this is also the one where Mothra does an intervention with Godzilla and Rodan.  Apparently each one wants the other to apologize for something, and they could are less about the humans since they're tired of having rockets fired at them.  Eventually, of course, the three come together.  Although Ishiro Honda was starting to get upset about how the scripts were going and how Godzilla was being portrayed, the fight between Godzilla and Rodan where they keep flinging the same rock back and forth is legitimately funny.  When they all gang up on King Ghidorah it makes for some great monster action.
The big problem is that the tone is beginning to shift.  Instead of people running at regular speed the camera is sped up.  It looks horrible when done with car chases, and looks even more horrible with people unless "Yakety Sax" is playing in the background.  There are two interludes of the Fairies calling on Mothra, one for a television show and the other to get her attention to come deal with Godzilla and Mothra, and both go on for way too long.  We are just inches away from a little boy in brown shorts being one of the main characters.  This is also one of the last times where Godzilla is truly a villain in the original series.  After this he ends up more often than not defending Earth against various alien invaders and menaces whenever he's not hanging out with his son on Monster Island.
Despite all that Malmess makes for a good villain while most of the cast members from the previous films are back in different roles, save Hiroshi Koizumi who reprises his character of Professor Miuri from the previous film.  Still, although it boils down to giant monsters throwing rocks, doing wrestling moves and pecking at each other, I do sympathize with Honda's frustration that his monster that was originally supposed to represent humanity's greatest threat was more and more turned into a cartoon.
Ghidorah, the Three-Headed Monster (1964)
Time: 85 minutes
Starring: Yosuke Natsuki, Yuriko Hosi, Hiroshi Koizume, Akika Wakabayashi, Emi Ito, Yumi Ito, Hisaya Ito, Haruo Nakajima, Shoichi Hirose, Masaki Shinohara, Katsumi Tezuka
Director: Ishiro Honds