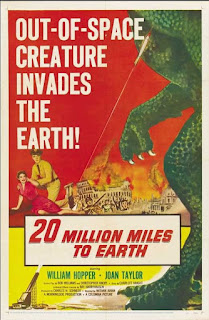 Science fiction films in the 1950s largely followed a set formula.  That is why there are so many of them, and so many of them that have largely been forgotten.  Most of them ended up as "B" pictures, supporting larger films, or just thrown together as quickly as possible to entertain the kids on a Saturday afternoon.  While some directors thought putting a diving helmet on an ape suit was good enough there were others that wanted their creatures to be a bit more believable.
By the time Ray Harryhausen did the effects for 20 Million Miles to Earth, it wasn't so much that directors were getting him to add interesting creatures to their movies, but more along the lines that he was getting creatures and stories together so that a studio could hire someone to direct, and some actors that looked the part so that he could display his latest creations.  It was no secret that, in some cases, watching Harryhausen's creatures come to life was really the only reason to see the movie.
A manned mission to Venus returns to Earth, but the damaged vehicle plunges into the Mediterranean Sea off the coast of a Sicilian fishing village.  The only survivor, Col. Robert Calder (William Hopper), after recuperating, expresses his concerns about a specimen they brought back from the planet that can withstand the extreme heat and hostile conditions of that planet.  They need to learn from it so that Venus can be exploited for mineral wealth.
A search for the creature reveals that it was sold by a local boy named Pepe (Bart Braverman) to Dr. Leonardo (Frank Puglia), a zoologist from Rome, whose daughter Marisa (Joan Taylor) helped treat Calder after the crash.  Calder, his commander (Thomas Browne Henry) and the local head of police (Tito Vuolo) track Dr. Leonardo down and find that the creature has been growing at a rapid rate since it hatched and has recently escaped.  It is captured and sedated, but soon it breaks loose and starts wreaking havoc upon Rome.
This was Harryhausen's last black and white film, and also the last before he started doing the more epic adventure movies based on myths and legends.  It is a pretty typical '50s sci-fi film, with a square-jawed hero, a love interest, the U.S. military helping to come to the rescue (although the Italian military does most of the work this time around) and a scientist that helps find a way to defeat the creature.  It does have a few unique points, though.  The creature itself eats sulfur and does not become dangerous unless provoked.  Still, as can be expected, everyone does a lot of provoking.  One of its main foes is a large elephant that becomes enraged and charges it, resulting in a battle between the creature and the elephant as various people try to get out of the way.
The acting is solid, even if the Sicilian fisherman, though stereotypes, are more interesting than the leads.  In the end, though, the point was set up a large creature that would do some destruction in Rome, largely so Harryhausen could visit the Eternal City and get paid for it at the same time.  Although it is not a spectacular movie by any measure his vacation at least gave us a unique looking creature and some imaginative scenes, even if some of the effects of the destruction in Rome appear to be unfinished or crude even by 1950s standards.  It is still a fun film and one of the better giant creature features of the time, although Harryhausen did make better movies both before and after.
20 Million Miles to Earth (1957)
Time: 82 minutes
Starring: William Hopper, Joan Taylor, Thomas Browne Henry, Frank Puglia
Director: Nathan Juran