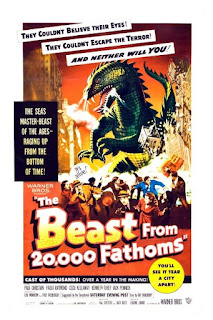 King Kong was the inspiration for numerous monster films just as Willis H. O'Brien, the man who worked on the stop motion animation for the big guy, was influential in special effects.  It was not just the stop motion, but the blending with live action and all the other techniques that were used to try to make the creatures look, as much as possible, like living, breathing specimens.  The movie was so popular that, even 20 years later, it was seeing re-release, albeit in severely edited form.  Its popularity touched off a wave of giant monster films in the 1950s.
O'Brien not only influenced special effects, but influenced and mentored artists in the field as well.  One that he did would go on to exceed him with his own innovative techniques, and that was Ray Harryhausen.  He expanded on what what he had learned and, although he himself started with a number of giant monsters trampling large cities, graduated to making some of the most inventive creatures in movie history.  His first film, and one of the best of the '50s science fiction films he worked on, was The Beast from 20,000 Fathoms.
A hydrogen bomb test in Baffin Bay is being observed by a number of scientists, including Prof. Tom Nesbitt (Paul Hubschmid).  The experiment goes well, but has the side effect of releasing a large prehistoric beast, which causes a landslide that kills one man and almost kills Nesbitt.  When he is brought back to New York with his tales of what happened he is put under psychological review, but soon a number of reported sea serpent attacks convince Nesbitt that something must be done.
Partnering with paleontologist Thurgood Elson (Cecil Kellaway) and his assistant Lee Hunt (Paula Raymond), Nesbitt succeeds in proving himself right.  Unfortunately, the beast is also headed straight for the Big Apple, and soon proves difficult to stop.
Right off the bat it should be said that the rhedosaur, as the beast is referred to, is a completely fictitious dinosaur designed by Harryhausen and based on drawings of real dinosaurs - or at least what most people thought they looked like at the time.  It is a four-legged beast and, surprisingly, they get the time right for when similar real creatures would have existed.  The only problem is that someone didn't know their Paleolithic from their Jurassic, so that slipped by in the script and made it into the movie.  Otherwise the creature is pretty much based on what knowledge there would have been about similar creatures at the time.
Also, although this movie was heavily influential on Godzilla, it does not have atomic breath or shoot radiation waves like the Giant Behemoth.  Instead, its size and predatory nature are its biggest immediate danger, but I admire this movie for adding another realistic touch: its blood contains disease bacteria that were frozen along with it and to which humans have no immunity, causing immediate infection and symptoms.  It is something that has been a worry for a long time, both with thawing frozen animal and human corpses and with climate change causing ice sheets to melt.  The rhedosaur is not impervious to human weapons, but it causes a complication to which it has to be killed in a way in which the microbes in its blood do not have a chance to spread.
As for the special effects, most of them are what is expected from Harryhausen.  Ray Bradbury had written a short story of the same name as the movie (which was originally to be called Monster from the Sea), which the producers eventually bought the rights to after Bradbury himself suggested changing the title.  Good that they did, because the scene where the rhedosaur attacks the lighthouse, which was pretty much the Bradbury story, is one of the best.  The other is a classic scene of a New York policeman stoically standing his ground against the monster and not so stoically being consumed.
There are a few problems.  There are long stretches, like in many of these movies, where there is a lot of talking about the creature and what it's doing rather than showing it.  Happily Paul Hubschmid, Paula Raymond and Cecil Kellaway are all game for this and seem to be having a good time making a monster film, so the human characters don't get forgotten.  The other problem is, among so many great effects, it has a horribly done scene where the rhedosaur consumes a shark and an octopus that are locked in battle.  It is laughable, and quite embarrassing that it was left in.  The other problem is one I have noticed with many of these old movies getting restoration; one of the reasons many of the effects looked convincing is because of the film quality of the time.  The higher the resolution of the restoration the more the trick photography is evident.
I still find The Beast from 20,000 Fathoms to be quite entertaining despite that and can definitely see how, while it was influenced by one of the most famous movie monsters of all time, went on to influence others.  Ishiro Honda openly admitted its influence on Godzilla, while The Giant Behemoth is pretty much a British remake.  This was also Harryhausen's first film in which he was the one responsible for the animations, and the rhedosaur opened up the door for him to become one of the most influential special effects artists, with a career that continued into the early 1980s.
The Beast from 20,000 Fathoms (1953)
Time: 80 minutes
Starring: Paul Hubschmid, Paula Raymond, Cecil Kellaway
Director: Eugène Lourié