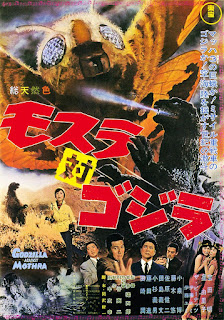 After the success of King Kong vs. Godzilla Toho decided that it would be a good idea to bring the big guy back permanently.  This time they paired him up with one of their other popular kaiju, Mothra, who had her own movie in 1961.  Directed by Ishiro Honda, written by Shin'ichi Sekizawa and with Eiji Tsubaraya providing the effects the movie pretty much expanded on the idea, first shown in Godzilla Raids Again, that the world is full of creatures that have been waiting for centuries to be awakened by human arrogance.
Where Godzilla touched on issues regarding post-war Japan, its place in the world and the shadow of nuclear destruction, Mothra had undertones of colonialism, including disregard for native traditions and the capture of the two Fairies (Yumi and Emi Ito) who are brought back to be put on display for Japanese audiences.  This causes the Mothra larvae to create a cocoon on Tokyo's radio tower, hatching a giant moth who pretty much makes it clear that the Fairies need to return and humanity better treat the world with more respect.
Mothra vs. Godzilla is, rather than being a sequel to King Kong vs. Godzilla or even Godzilla Raids Again, is a direct sequel to Mothra, with the same writing, directing and special effects team.  Also, although Godzilla is still very much the villain in this, resulting in Mothra and her offspring to reluctantly have to defend Japan against his threat, this is pretty much the precursor for the rest of the Showa era.
There is no real explanation for Godzilla's return, although no body is ever seen at the end of King Kong vs. Godzilla and both roars are heard in the final scene.  Still, this version looks different once again, so either Godzilla just went to lick his wounds after King Kong dunked him in the sea or this is once again another creature of the same species.  Either way, this, with some alterations as the suits got wear and tear, would be the same guy until 1975.
After a Typhoon washes a strange egg onto a beach in Japan, businessman Kumayama (Yoshifuma Tajima) buys it from the local fisherman to be the center of an amusement park being funded by Jiro Torahata (Kenji Sahara), the spoiled son of a politician.  However, the Fairies show up, begging Kumayama and Torahata to release the egg back to them.  Instead, the two businessmen try to capture the Fairies, who instead turn to journalists Ichiro Sakai (Akira Takarada) and Junko Nakanishi (Yuriko Hoshi) as well as biologist Prof. Miura (Hiroshi Koizumi) for help.
At first they find they must refuse because Torahata is too powerful to go up against, but then themselves have to reluctantly go to Infant Island, which has been destroyed by nuclear testing, and beg the help of Mothra (Katsumi Tezuka) after Godzilla (Haruo Nakajima) rises from the typhoon damaged beach near Nagoya.  Understandably the natives, and Mothra, are not too happy with being asked, but it turns out it is in Mothra's best interest as Godzilla is headed straight for her egg.
Mothra vs. Godzilla is undoubtedly one of the best entries in the entire series, featuring improved effects by Tsubaraya and one of the best Godzilla suits in any of the movies.  Mothra may look a bit goofy, but the fights between her and Godzilla are well done.  There is the problem of being able to see the devices shooting the webs from her offspring, but it is the only major flaw in what is some great miniature and composite work.  Yu Fujiki and Kenji Sahara are both back from King Kong vs. Godzilla, although of course playing different characters - Fujiki being a bumbling, egg-obsessed reporter, while Sahara gets to play a decadent villain.  Akira Takarada, who had played one of the lead parts in Godzilla, also returns to the series, once again as one of the heroes.
While Anguirus was created specifically to give Godzilla someone to fight in Godzilla Raids Again, and King Kong was supposed to be a one-time crossover, this movie begins the trend of taking other Toho monsters (largely from movies directed by Ishiro Honda, and often using much of the same cast from movie to movie) and having them fight against, or sometimes allied with, Godzilla.  Also, as it went along, it became more and more geared toward a younger audience, and a bit of a hint of that happens here with a bit of a cheesy farewell to the Fairies and Mothra's offspring at the end.  Still, before we get to the point of Godzilla getting his groove on (and finding his way onto Mystery Science Theater 3000), we had at least one movie coming up that showed that Godzilla, as a defender of our planet, could be done seriously and done well.
Mothra vs. Godzilla (1964)
Time: 89 minutes
Starring: Akira Takarada, Yuriko Hoshi, Hiroshi Koizumi, Kenji Sahara, Yoshifumi Tajima, Emi Ito, Yumi Ito, Haruo Nakajima, Katsumi Tezuka