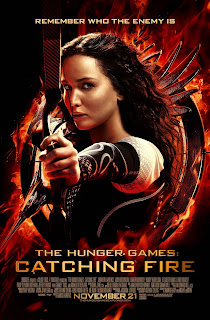 I will admit that I have not read these books.  Despite the fact that the romantic subplot was obviously aimed toward teenage girls, the world building that Suzanne Collins did is quite admirable.  Sure, there are a lot of questions, but these are questions that no one that lives in the society of Panem would be able to answer anyway.  It is a world that is alien but, at the same time, still has much of the familiar, and at the heart of everything is a good story that can be appreciated no matter the age of the reader.
The Hunger Games, as a movie, took me some time to warm up to, especially since Gary Ross's direction seemed in some ways more akin to an indie film.  I appreciate it more because of The Hunger Games: Catching Fire, which is a superior film, but also owes a debt to the casting and style of the first even if the tone is completely different.  The first is largely establishing the world, and the Hunger Games themselves.  Though a significant part of the film, the event that gives the books and movies their name seems secondary to establishing the characters and the motivations that they have going forward.  The games also take up a good portion of this as well, but again in a much less crucial manner than one would think.  The first spent a lot of time showing us District 12 and the Capitol, while this shows us even more about Panem and is the payoff of the events we saw before.
One year after Katniss Everdeen (Jennifer Lawrence) and Peeta Mellark (Josh Hutchinson) are declared the victors of the 74th Annual Hunger Games they are tasked with keeping up appearances as a loving couple, although Katniss secretly still carries a torch for Gale Hawthorne (Liam Hemsworth).  Having moved from their home to the relative comfort of District 12's Victor's Square, they are preparing for a tour of the districts of Panem.  Unfortunately, President Snow (Donald Sutherland) has still not forgiven them, as many of the districts have seen their victory as an act of defiance against Snow's rule.
Civil unrest follows the tour, leading Snow to look at options of removing Katniss without making her a martyr.  With the help of his new games master, Plutarch Heavensbee (Philip Seymour Hoffman), he decides to make the 75th edition of the games special.  Following the tradition of a Quarter Quell, he announces that a male and female will be chosen from the living victors in each district, knowing that Katniss will be chosen, and hoping that she will die in the arena.  However, other forces seem to be at work while she trains and while she fights, as she finds herself more and more a reluctant sign of hope for Panem.
While I didn't love The Hunger Games on first viewing the world intrigued me.  This time around Francis Lawrence directs, and it does surprise me that this works as well as it does, particularly since Lawrence's directing history is largely made up movies that I either never cared for or never thought it was worth my time to watch, as well as a bunch of bad pop videos.  Since he is a capable and workmanlike director, much of the credit for the success of Catching Fire goes to Samuel Beaufoy and Michael Arndt, who adapted the story for the screen.  Lawrence wisely seems to just keep out of the way so the events can play out.
In truth, the way the movie was written and paced is what got my attention the first time around, and even more on a second viewing.  It feels like quite a lot of the book is there, with even characters as Effie Trinket (Elizabeth Banks) getting somewhat of a story arc.  Gale actually serves a purpose this time around other than looking hunky and forlorn and, while the romantic subplots are still the weakest part of the story, Katniss's growing affection for Peeta feels organic rather than forced.  Another thing I do admire is the way many of the events mirror those from The Hunger Games, but with a completely different tone, often recalling Leni Riefenstahl's Triumph of the Will.  There is less spectacle and more edge, revealing more than ever how Panem's entire existence barely hangs on oppression and fear.
Catching Fire is not only a great companion peace to the first Hunger Games, but when watched together they set up for something grand, and for the hope that for once Hollywood will do a book series some justice.  Unfortunately, the trend forever has been to milk every movie for every dollar it can produce.  Harry Potter and the Deathly Hallows was split into two movies, The Hobbit was inexplicably stretched to three, and Mockingjay, the third and concluding book in the the Hunger Games series, was divided into two.  Despite the fact it was still the same director and largely the same cast - The Hunger Games: Mockingjay, Part I had to work around Philip Seymour Hoffman's sudden death - the momentum built for the first two movies slowly came to a grinding halt.
The Hunger Games: Catching Fire (2013)
Time: 146 minutes
Starring: Jennifer Lawrence, Josh Hutchinson, Woody Harrelson, Liam Hemsworth, Donald Sutherland
Director: Francis Lawrence