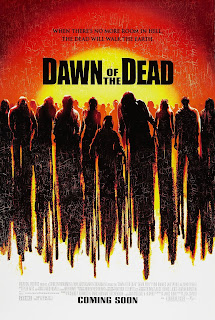 Supposedly the point of remaking a classic film is to make the story more accessible to modern audiences.  I say supposedly, since the real reason is to make money without much effort, or by fooling people into thinking they are are about to watch the original.  Either way there are rare times when the people involved in the remake have actually seen the original and even rarer times when they have respect for the original.  In this case both writer James Gunn and director Zack Snyder had George Romero and the original Dawn of the Dead in the front of their minds when doing the remake.
Ana (Sarah Polley) comes home after a hard night working at the local hospital for some alone time with her husband and a bit of rest.  She awakes the next morning to find the neighbor girl (Hannah Lochner) in her home.  After the girl attacks and kills Ana's husband (Louis Ferreira), he comes back to life and attacks her.  She manages to flee and, after wrecking her car, meets up with police officer Kenneth (Ving Rhames) as well as other survivors Michael (Jake Weber), Andre (Mekhi Phifer) and Luda (Inna Korobkina).
The group takes refuge in a mall, only to find it inhabited by the mall security, who are none too friendly.  Other survivors soon arrive and, as the dead begin to mass outside and their refuge become unstable, the group devises a plan to to leave the mall to seek refuge on one of the islands in Lake Michigan.
Zack Snyder's version of Dawn of the Dead moves the action from Pittsburgh to Milwaukee, but still the majority of the movie takes place in a shopping mall.  That, and the fact there are zombies, are really the only similarities between the Romero and Snyder versions, which has its good and bad points.  The good is that we are not watching a scene-by-scene remake, and we're also not watching a reboot.  It is an update with more characters and more tension between them.  The problem with that is, even though James Gunn may have written certain characters to have more of a reason for being in the movie, by the time it was cut down they just seem extraneous.  Monica (Kim Poirier), the girlfriend of the arrogant Steve (Ty Burrell), had most of her scenes cut, for example so, while her end is a bit shocking, it doesn't have the motional impact.
The other problem I will always have with this movie is the fast zombies.  I never found the slow ones to be comical, nor their speed to be a hindrance; it was always their numbers rather than their dexterity that was the problem.  I know that Gunn and Snyder were influenced by 28 Days Later, but the so-called "zombies" in that were actual living people who, due to circumstances, were exposed to a drug that gave them speed and strength.  Since these are corpses there is no reason for them to have either.  Also, because of the number of auxiliary characters, instead of the mall falling due to an invasion by a roving biker gang, most of their problems are brought on by stupid decisions.  These are often made by one person - Nicole (Lindy Booth) - who seems to be only in the movie to get in the way.  It's a common complaint I have with The Walking Dead as well, and that is there always has to be an extra effort by someone to make a wrong decision.
Despite all that Snyder still managed to make a movie that, though a remake, can stand on its own.  While the hangers-on may be annoying or just there to screw up, the central core of Kenneth, Ana, Michael and CJ (Michael Kelly), a seemingly hostile character at first that turns out to be decent, works.  There is no real fight for leadership; instead, all four contribute, and all have ideas that keep them and their companions alive a lot longer than they would have otherwise.  There are instances where they get on their nerves but it is realistic for people who are holed up with each other for a couple months with practically no escape from each other.
Also, after all these years, the first 10 minutes of this movie are still absolutely brilliant.  It was shown on broadcast TV to promote the movie and, because of budget and because it wouldn't be Dawn of the Dead without largely taking place in a mall, it was not something that could be sustained, but the absolute speed at which everything just goes wrong is amazing.  That the movie, even with its many problems, manages to keep one's interest for the remaining 91 minutes means something right came out of this writer-director partnership, although a good portion of the credit for that goes to Sarah Polley, Ving Rhames and Jake Weber as well.  While it may have been too close to the original, just having the three of them - and gun store owner Andy (Bruce Bohne) - probably would have made the movie more effective .
Despite the inclusion of characters that are there to do nothing more than create problems or screw things up for everyone else I still think that Dawn of the Dead is one of the few remakes that not only pays tribute to the original, but itself has enough originality to stand on its own.  The debate on fast versus slow zombies will probably continue forever, but Snyder still manages to maintain the feel of the original throughout a good portion of his version.  As for updating it for modern audiences, 2004 is starting to look as ancient as 1978 at this point.  That, however, does not mean we need a third version of this.
Dawn of the Dead (2004)
Time: 101 minutes
Starring: Sarah Polley, Ving Rhames, Jake Weber, Mekhi Phifer, Michael Kelly
Director: Zack Snyder