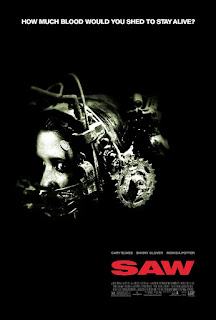 Movie franchises tend to get away from those who create them, even if they still have some tenuous involvement.  This is even more true if they are not intended originally as a franchise.  Friday the 13th, for instance, was made due to the success of Halloween, and the intent was clear: make a film where someone is killing on a holiday of some sort, and make a ton of money.  It somehow evolved from a simple revenge tale to an undead killer who at some point rampages aboard a space station.
As long as they make money horror films get sequels, and it is not hard to make money off of them.  Saw, for instance, was made largely in a warehouse with several rooms that were decorated for whatever was needed and one set for where the main story takes place, with almost no exterior shots.  Total cost was around 1.2 million dollars.  It made over a hundred million worldwide for first time writer/directors James Wan and Leigh Whannell and, rather than the gruesome Rube Goldberg devices that filled in for the lack of a masked killer in the sequels, was a tight suspense thriller.
Adam (Whannell) and Dr. Lawrence Gordon (Cary Elwes) wake up in an industrial bathroom, chained to the pipes and with no memory of how they got there.  There is also a body in the room with them of a man who appears to have committed suicide.  They soon find cassette tapes in their pockets and, when played, they give them instructions.  Dr. Gordon, if he wants to see his wife (Monica Potter) and daughter (Makenzie Vega) alive again, must kill Adam before the clock on the wall reaches six.
In flashbacks we get to know the two and their less than perfect lives, and we also learn about the killer named Jigsaw (Tobin Bell), who puts people through various trials in order to make them see what they have done wrong or make them appreciate their lives.  Gordon was previously a suspect, and he has been stalked by an David Tapp (Danny Glover), an ex-police detective who worked on the Jigsaw case and has a personal vendetta.  In addition, Adam and Dr. Gordon, supposed strangers, may have a connection that led to Jigsaw putting them together for this particular game.
The Saw series is known for being part of a genre that I try to avoid using to describe movies, since it is overused and typically doesn't fit the films it is attached to, and that is "torture porn."  The reason I hate the phrase is because it implies that, like the majority of pornographic films, there is little thought given to the plot other than to connect a series of scenes for the viewer to get some sort of pleasure.  Saw, at least the first film, doesn't feature any scenes of extended torture, and for that measure doesn't want the audience to derive pleasure from anything that is happening.  It is also clear that Wan and Whannell are interested in giving what happens some sort of meaning, and, in some ways, making sure it makes sense.
No matter what the sequels became (which were not much of a thought at the time this was being made - this was their first project out of film school), this was meant to be more of a mystery film with horror elements.  There is the iconic "reverse bear trap" scene, but it is there largely to avoid a typical exposition dump, as well as because they largely pitched the movie using it (with Whannell in the trap instead of Shawnee Smith).  Admittedly the razor wire maze would be worse, but little is shown besides the aftermath, and a major part of the finale is left to the imagination.  It is disturbing, there are gory scenes as would be expected, but if there is any actual torture in the first film is psychological rather than physical.
Since it is the team's first movie there are problems.  The acting ranges from great to amateur, but that is to be expected.  Some of the logic of the film can be questionable.  There is a huge elephant in the room, pretty much literally, that requires some suspension of disbelief.  Still, it pretty much ties up everyone's motivations by the end, even if Jigsaw's logic and motives don't exactly match the results.  Despite Amanda (Smith) recounting her story for the detectives and Dr. Gordon, there is not a lot that makes the audience sympathize with him, as we still have little back story on him.
While this sets up the movies that follow, and there are many twists of logic in the sequels to connect to the events that happen in this one, it works as a standalone movie simply because it was intended as such.  It was a film that could be made on a limited budget to get James Wan and Leigh Whannell noticed, and they never expected it to be the financial success it became.  While I ponder what kind of leaps of logic will be used to keep the story going (another sequel is expected in 2021), at least the place where it starts will always be a solid horror and mystery film that deserves its continued status as a key film in the genre.
Saw (2004)
Time: 103 minutes
Starring: Cary Elwes, Leigh Whannell, Danny Glover, Shawnee Smith, Ken Leung
Directors: James Wan, Leigh Whannell