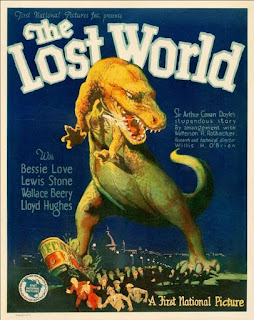 Sir Arthur Conan Doyle wrote The Lost World in 1912 and was alive to see his story about explorers finding living dinosaurs on an isolated South American plateau brought to life.  Supposedly he was rather pleased with the result.  A lot of that was due to Willis H. O'Brien, who had been working with stop motion animation, doing short films for Thomas Edison for a number of years and had, by the early 1920s, began combining the animation with live action.
These advancements led to the ability to make a film like The Lost World, which, though in some ways appearing crude today, was just as influential as Metropolis when it came to special effects.  It didn't hurt that, although a number of liberties were taken with the story, it was an elaborate and exciting adventure epic.  Also, while Harry O. Hoyt is credited with direction, a good portion is animation under direction of O'Brien, who brings to life an entire world of dinosaurs, and not just one or two models.
Professor Challenger (Wallace Beery) returns from an expedition to South America with wild tales of living dinosaurs.  The only proof, as film of the creatures was destroyed, are pictures drawn by an American woman named Mable White who was part of the team.  Her daughter Paula (Bessie Love) and the Professor were the only survivors, with her mother presumed dead and her father stranded.  Challenger and his friend Sir John Roxton (Lewis Stone) plan to mount a rescue mission.
Ed Malone (Lloyd Hughes), a London reporter, manages to get his paper on board to fund the mission with the promise of them getting exclusive rights to the story of the rescue.  After a months-long journey they reach the plateau, where they are set upon by an apeman (Bull Montana) and face a number of other dangers as the Professor's story turns out to be true.  Eventually managing to escape they hope to clear Challenger's name with an unexpected prize - a living brontosaurus, which he intends to transport back to England.
O'Brien could have just made a bunch of dumb monsters, but instead he made an entire ecosystem.  Although the makeup is great, I do find the apeman and his chimp companion to be kind of silly and unnecessary, but at the time O'Brien did something revolutionary by going against most scientific thinking and making the dinosaurs active foragers and predators.  On top of that it shows triceratops caring for its young and existing in herds and allosaurs not as scavengers.  At the time it was thought that most of the dinosaurs were sluggish, swamp-dwelling reptiles without much intelligence, and O'Brien equated them with modern animals, something that even most scientists wouldn't get on board with for another 60 to 70 years.  In many cases the dinosaurs don't even pay attention to the humans that have shown up as they are busy living their own lives.  The animations may not be as refined as they would be for King Kong, but they are amazing, and a lot of time went into making them.
However, The Lost World does not rely on dinosaurs alone.  The early interactions between Challenger and Malone, especially after the former finds out the latter is a reporter for the newspaper he is suing, are absolutely hilarious.  The romantic subplot evolves believably and over a number of months rather than suddenly coming out of nowhere and, although there is a triangle of sorts, it never devolves into the cliché of the rival putting the mission at risk due to his romantic entanglements.  It is rare that the human characters get as much attention as the creatures in these movies.  I only wish some of the comic relief didn't involve a guy in blackface and title cards with the typical minstrel show dialect of the time.  I understand there was no outright hate involved and it was no different than other films at the time in this aspect, but for a modern viewer it is quite jarring.
There are several versions of this movie available, and I would suggest taking the time to watch the one from Lobster Films that runs 103 minutes.  The original cut of the movie was 110 minutes, and from what I understand the current version is missing some story scenes and an attack by cannibals.  Other than that, unless those fragments are ever found, this movie has been reconstructed as much as possible, along with the original tinting, and is probably the most complete version that will ever be seen.  For  the longest time this only existed in a version that slightly over an hour, as the movie had been chopped up to mainly feature the dinosaur scenes and many of the original copies destroyed when plans were made to make a sound remake in the 1930s.
By the way, the poster is quite misleading.  It is actually a brontosaurus, not an allosaur, that makes its way through London, and in this case it is confused and scared rather than aggressive.  Those are still some of the most impressive effects in the movie and, outside of the fight between an allosaur and a triceratops, probably the scene most modern audiences would be familiar with.  This is definitely something to see for anyone who is a fan of stop-motion animation, but happily it was also one of the best adventure films prior to King Kong, and it's no accident they share a number of similarities.
The Lost World (1925)
Time: 103 minutes
Starring: Wallace Beery, Lloyd Hughes, Bessie Love, Lewis Stone
Director: Harry O. Hoyt