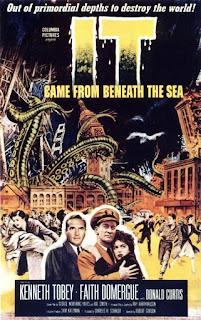 Amazing what barely a few minutes' footage of a giant octopus can do for a movie.  It not only made this a classic, despite the monster being absent throughout a large portion and the movie having many of the trappings of low-budget '50s sci-fi, but it also brought Ray Harryhausen together with producer Charles H. Schneer, with whom he would work the rest of his career and grace us with many better films than this.
Largely Harryhausen was brought in because he could do decent effects for cheap, and by cheap I mean a situation where he couldn't afford to put the right number of arms on an octopus and had to angle his model to hide the fact that a couple were missing.  Still, there are a number of things about this movie that puts it ahead of its brethren of the time, and not just Harryhausen's octopus.
When a nuclear submarine is attacked by an unknown creature while on a shakedown cruise, Prof. Lesley Joyce (Faith Domergue) and Prof. John Carter (Donald Curtis) are brought in to help the Navy figure out what it was.  The sub's commander, Pete Mathews (Kenneth Tobey), is given the job of overseeing the research, which mainly means waiting for results and hitting on Prof. Joyce.
It turns out the culprit is a giant octopus that has received a large dose of radiation, thus causing its normal pray to avoid it.  Hungry, it has come up from its normal deep sea habitat to hunt in the upper layers of the ocean.  Soon it starts hunting what it can on the west coast, making its way into San Francisco.  With help from Carter and Joyce, Mathews must find a way to stop the creature.
Despite the budget the effects are pretty good for the time.  The octopus manages to tear apart the Golden Gate bridge and the Embarcadero, but understandably doesn't get too far ashore.  There is also an attack on a ship at sea and, wisely, the initial attack on the submarine doesn't rely on costly underwater effects, but all takes place on board the boat.
That is where one of the big surprises come in.  I have never been in the Navy but I have had the pleasure of touring a World War II era submarine.  One of the first things I understood was that, with a full compliment of men aboard, things were a bit cozy.  Often in movies scenes aboard submarines make it look like there is the space of a normal ship; this time around it was immediately clear that the crew got to film aboard a real one, and for the life of me I'm wondering how they got a film crew and those old '50s cameras in the boat.  Still, congratulations on bringing a sense of realism to the proceedings.
The other thing is that the science isn't terrible.  The octopus is not giant because of radiation, but just happens to be an undiscovered species that exists in some of the deepest parts of the Pacific Ocean.  The radiation comes from the fact it was either affected by testing or ate food that was highly radioactive.  Also, that is the entire reason why it has surfaced and started attacking: it's hungry and is driven to desperation.  It's something that unfortunately happens quite often when habitats are damaged.
Lastly, although it is clumsy and quite patronizing by today's standards, there is some effort not to pigeonhole Prof. Joyce in the typical heroine role.  She is treated as a scientific equal by Carter, even though his and Mathews's talks about "modern women" still feels like they're patting her on the head.  There is also a scene where she uses her sex appeal to get the truth about a fishing boat attack out of one of the survivors.  Still, though pursued by Mathews, and not averse to his pursuits, she still puts her career above romantic flings, which definitely bucks many of the trends of these types of movies.  Normally the female lead falls into the handsome hero's arms within minutes of meeting him, no matter how inappropriate the man gets - and Mathews gets plenty inappropriate.
As for the rest of the film it is a decent monster movie.  Just expect the usual large amount of narration and stock footage to make up for the holes in the budget, although the opening tension on the submarine is well done and works much better than showing the monster that early in the film would have done.  It manages to thrill when it can and somehow not to be too boring during the times when everyone sits around tables to discuss things, although it is much slower paced than many modern audiences would be used to.
It Came from Beneath the Sea (1955)
Time: 79 minutes
Starring: Kenneth Tobey, Faith Domergue, Donald Curtis
Director: Robert Gordon