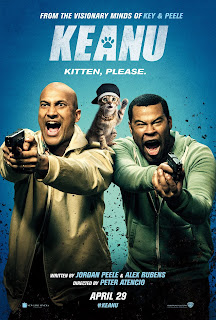 Jordan Peele has become one of the best new horror directors.  Until recently he hosted the latest reboot of The Twilight Zone, he has two critically acclaimed hits with Get Out and Us, and has reached the pinnacle of any famous director - having his production credit boldly featured at the top of movies that are not as good as his to try and trick people into seeing them.  Long before that, however, he was in the comedy duo Key and Peele, who had one of the many shows on Comedy Central that tried to make up for the void left by Dave Chapelle's early departure.
Their show was one of the more successful, with many of the skits released on YouTube during the show's run and earning a cult following even from those who didn't watch the television show.  Peele had frequently voiced his desire to go into movie making, and before his acclaimed horror films he co-wrote the script for Keanu with Alex Rubens.
Clarence (Keegan-Michael Key) and Rell (Peele) are cousins living two separate lives.  Clarence is an uptight family man, while Rell is a photographer and a movie nerd who smokes copious amounts of weed.  Rell is in the dumps after being dumped, but his state of mind doesn't last for long due to the arrival of a new friend: a little kitten that shows up at his door that he decides to name Keanu.  Rell's life begins to turn around, with Keanu giving him inspiration once again.  Unfortunately, that soon changes once he and Clarence return from a movie and find that Rell's house has been burglarized and Keanu is missing.
It turns out the cat has a past.  He was the pet of drug dealer King Diaz (Ian Casselberry), and then caught the attention of a pair of unstoppable assassins (also played by Key and Peele) before coming to Rell.  Clarence and Rell soon find out that the cat was taken by Cheddar (Method Man), the leader of a street gang called the Blips, and the two pose as the assassins in order to try to get the cat back.  Unfortunately, a life of crime tends to be a bit overwhelming for the pair, though they are willing to take the risk for Keanu's sake.
Keanu has quite a number of laugh-out-loud moments, and of course the cat is adorable.  I would wager that the cat got more people to see the movie at the time than the stars did.  The smart thing was that they decided to make this an action comedy, and director Peter Atencio, who collaborated with them on the show, does a solid job.  Going the action comedy route also saved it from being heavily loaded with attempts to do gross-out jokes; I do give the duo credit for maintaining the focus of getting the cat back.
Unfortunately there are severe pacing problems.  There is an extended scene where Rell and gang member Hi-C (Tiffany Haddish) sell drugs to an ever-increasingly unstable Anna Faris and, while slightly amusing at first, goes about five minutes too long.  It is happily interrupted by Clarence introducing the rest of the gang to George Michael, which is the funnier of the two bits, but even that seems to overstay its welcome after awhile.  It is as if they had leftover ideas from their show that they tried to cram in, and it just slows things down.
Also, for being the lead characters, neither Clarence nor Rell ever seem to go beyond their stereotypes.  Obviously Key and Peele work well with each other, but they may have forgotten that the characters needed more than just incidental development to keep them interesting.  By contrast, the Allentown Brothers, the assassins that they also portray, are far more interesting although they say nothing the entire time.
By tightening up some of the side jokes and adding a bit more gravitas to the characters they could have had themselves their own Lethal Weapon type movie.  As it is, it's not bad; in fact, in many places, it is a lot of fun.  Since they went their own ways Peele has definitely proven that he has a lot more in him than just comedy, but that doesn't mean this should be forgotten.
Keanu (2016)
Time: 100 minutes
Starring: Keegan-Michael Key, Jordan Peele, Tiffany Haddish, Method Man
Director: Peter Atencio