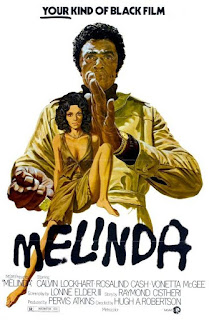 While Melinda definitely falls into the blaxploitation realm, it is still early enough in the run of these films where, though trading on gangster and revenge tales, the protagonists were something other than pimps or drug pushers.  The trend, in large part, was against what were seen as diseases in the Black community.  Many of the movies, even ones that followed the escapades of those on the wrong side of the law, included subplots where white authority figures were helping to mastermind the distribution of narcotics and encouraged crime to keep the communities down.
The early black-produced films tended to portray more positive role models - John Shaft as a private detective, Cleopatra Jones as a special agent with the FBI and, in this one, Calvin Lockhart as a popular disc jockey on a Los Angeles soul station.  The difference with Melinda is that instead of trying to go over the same ground as some of the first batch, writers Lonne Elder III and Raymond Cistheri, along with director Hugh S. Robertson, decide to throw a bit of a Hitchcockian twist to things.
Frankie J. Parker is a narcissistic DJ, although he is not above helping out his community when needed.  In hot water with his boss for advertising a community center run by his friend Charles Atkins (Jim Kelly), he decides take a load off by visiting a bar owned by ex-football player Tank (Rockne Tarkington).  While there he meets a woman who says her names is Melinda (Vonetta McGee) and enjoys the night with her, much to the chagrin of Terry (Rosalind Cash), who happens to have a crush on him.
The next morning he returns to Melinda to find her murdered and also to find himself the prime suspect.  After being released it turns out that Melinda was the lover of mob boss Mitch (Paul Stevens), and that Melinda may have had something on her that he wants back.  Problem is he now thinks Frankie has it and, with Terry's help, he tries to figure out what the mystery is about while also trying to get revenge for Melinda's death and his frame-up.
While it is a classic Hitchcock plot, right down to the macguffin, Robertson unfortunately doesn't shoot it like a Hitchcock film.  This was his first movie after working as an editor on such films as Midnight Cowboy and, honestly, it doesn't seem like there is much style to it at all.  The fight scenes are competent, although it is hard to hide that Lockhart is not exactly trained in martial arts, especially when paired when Jim Kelly makes his debut in this movie in a small role.  I may have different feelings about the look and feel of the movie if a widescreen version ever becomes available.  Happily, the pan and scan version is clean enough to be watchable, putting it a step ahead of a lot of the lesser-known black films of the 1970s.
As for the story itself, it does start off rather slow, with Frankie J.'s preening and slick talk being more than a little annoying, but once the murder happens it begins to move.  It's nicely written, has a few nice twists and a great scene with Rosalind Cash pretending to be Melinda to get into a safe deposit box.  I also quite like the ending; I just wish this had a bit more flair and style to the directing, as the movie truly deserves it.
Melinda (1972)
Time: 109 minutes
Starring: Calvin Lockhart, Rosalind Cash, Vonetta McGee, Rockne Tarkington, Paul Stevens
Director: Hugh A. Robertson