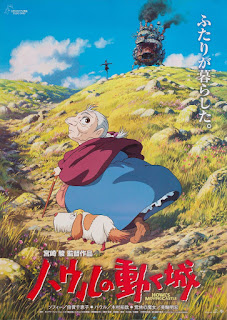 I have no idea when I will revisit Hayao Miyazaki's work - a lot of it looks like it is strictly for children - but I am glad that I decided to check it out after all this time.  Spirited Away, though meant for certain age group, still surprised me with how entertaining it was for adults.  I had heard great things about Howl's Moving Castle, although I was unaware that it was originally a children's novel by Welsh author Diana Wynne Jones, who was reportedly quite happy with Miyazaki's version of her book.
While I did have A Wrinkle in Time, I really wish I had more books like this available to me growing up.  I was entering high school when the Howl's Moving Castle was published, but if it had come out about three or four years before I would have loved it.  I read novels for adults largely at that age because, story wise, that was what was there to interest me, but whenever I had the chance to read something interesting that didn't infantilize children of my age, I loved it.
The cartoon doesn't make that mistake either and, like Spirited Away, is enjoyable even for adults.  Miyazaki, though using a Japanese voice acting cast (although I understand the English dub on this movie is one of the better ones as well), keeps the strange steampunk Central European setting, and it wastes no time in introducing us to both the wizard Howl (Takuya Kimura) and his castle.  It seems Howl has a reputation with the ladies, but Sophie (Chieko Baisho) is kind of surprised when he turns his eye to her. Unfortunately, he is being pursued by the Witch of the Wastes (Akihiro Miwa), and when she can't get at him she casts a spell that turns Sophie into an old woman and, to make matters worse, fixes it so she can't tell anyone about it.
Howl has his own curse due to a bargain made with the fire demon Calcifer (Tatsuya Gashuin), who also powers his castle.  After Sophie rescues a living scarecrow, it finds the castle to give her shelter from a rain storm.  She claims to be a cleaning lady and proceeds to tidy the place as well as take care of Howl's apprentice Markl (Ryunosuke Kamiki) and annoy Calcifer.  Together they all try to figure out how to lift their curses as well as end the war.  The world they exist in is one that resembles Victorian England, but has technology that is a combination of steampunk and magic.  Unfortunately the country that Sophie lives in is going to war with another unnamed state, both of which use giant airships with conventional weapons as well magic - typically wizards that have turned themselves into demons.
I have noticed that, even when given abundant source material, Miyazaki still likes to let the filmed story develop organically.  Thus, the plot and the direction it is taking is not immediately apparent, but is rather interesting when it does.  Wynne Jones did a wonderful job of creating such a world long before Steampunk became such a popular genre, and Miyazaki embraces it for all it's worth.  It's as if the strange inventions and ships she wrote about were tailor-made for his type of animation.
I was concerned that this might be aimed to much at younger children, or that it might be too much of a romantic fantasy aimed at young adult women.  It is perfect for both, of course, but again is also perfectly enjoyable for adults.  It has a great sense of humor despite the dark events building in the background, the castle itself is a sight to behold - part living being and part moving house, with the chicken legs from the old Baba Yaga legends thrown in for good measure.  Other than the ending getting a bit sappy, albeit intentionally, I really don' t have any major complaints - other than it may be a while before I get to watch any more of Miyazaki's films.
Howl's Moving Castle (2004)
Time: 119 minutes
Starring: Chieko Baisho, Takuya Kimura, Tatsuya Gashuin, Akihiro Miwa, Ryunosuke Kamiki
Director: Hayao Miyazaki