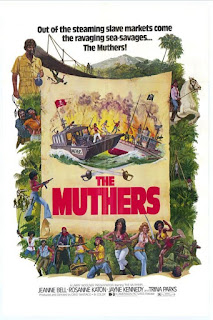 Whenever I hear that a movie is one of Quentin Tarantino's favorites I don't exactly jump for joy.  I have a love of bad films, but I often think that many of the movies Tarantino watched while sitting in rundown grindhouse theaters just convinced him that he could do better when he got his chance.  One of the movies he was right about, The Street Fighter, I didn't even believe was a real movie when I first saw the scene of Christian Slater and Rosanna Arquette going to a theater to watch it in True Romance.  It looked like one of those made-up movies, such as Angels with Filthy Souls or See You Next Wednesday.  If there was anything Tarantino did, other than make me quite a happy theater-goer in the early 1990s, it was turn me on to how much more that was out there that I hadn't seen.
But, again, his reasons for liking movies is not because they are particularly good.  I am glad that he is aware they are bad - he happens to be a big fan of Manos: The Hands of Fate, after all - but that doesn't always mean they are even watchable.  Happily, as bad as The Muthers is, it is still somewhat enjoyable, but I don't find it to be as great in its awfulness as he thinks.
Kelly (Jeannie Bell) and Anggie (Rosanne Katon) are the leaders of a group of modern pirates operating off the coast of South America.  After returning from looting and a battle with their rival Turko (John Montgomery), Kelly finds out that her sister Sandra has run away from camp.  A search for her leads to an agent from the unnamed country's Justice Department, who informs her that her sister is in a prison camp that doubles as a coffee plantation run by a man named Monteiro (Tony Carreon), and that no one has ever escaped.
Kelly and Anggie go to the prison at his behest, with the offer of their crimes being forgiven, but soon find out that they may be there longer than they expected.  With the help of fellow prisoners Marcie (Trina Parks) and Serena (Jayne Kennedy) they hatch an escape plan.
This is one of the few movies where the poster is telling the truth.  There are actual fights on the sea between make-shift pirate boats and a good portion of the movie is a women in prison feature that, surprisingly, is mild on some of the worst aspects of those types of movies.  Writer and director Cirio H. Santiago would have been better sticking with one genre, as a blaxploitation pirate film is something we are severely lacking.  Turko kidnaping Sandra instead of going through all the usual nonsense would have made things so much better, as Santiago is halfway decent at filming action scenes that involve gun fights and explosions.  He's not so good with hand-to-hand combat, as this is another film where it seems the wind from fists knocks those enemies right out, even from about a foot away.
Instead of fun, over-the-top pirate action, we get a rather predictable film with a fun beginning and end and a middle that goes on forever.  It's not so much that this is a "cruddy little film," as Tarantino put it, but that it is a rather mediocre movie that offers little more than a few unintentional laughs - especially with that South American cobra.  It should be no surprise that this is a movie made in the Philippines, and by the same director as TNT Jackson, which also starred Bell.  Because of some bad post-production dubbing I have a hard time figuring out how competent of an actress she is, because I swear there are times where it sounds like a different woman saying the lines, especially when no one's mouth is moving.
I don't even see watching The Muthers for a laugh, as it is too badly paced to keep interest, even during it's short run time.  Again, if Santiago had just stuck with the ludicrous pirate concept, this would have been a wonderful b-movie, but instead he gives us something that both Jonathan Demme and Jack Hill have done much better.
The Muthers (1976)
Time: 83 minutes
Starring: Jeannie Bell, Rosanne Katon, Trina Parks, Jayne Kennedy, Tony Carreon, John Montgomery
Director: Cirio H. Santiago