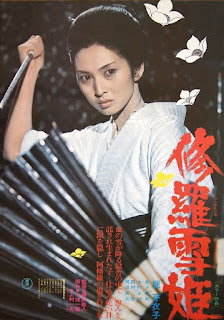 Quentin Tarantino's movies often receive some hipster hate these days, as former fans try to earn cool points by taking him down a notch for stealing large chunks of other movies for his films.  Notably, they like to go after Kill Bill Vol. I and Vol. II.  While I am not a big fan of the second, I quite like the first one.  What confuses me, however, is that the hate comes now.  From using miniature sets of Tokyo that were later used in one of the 2000s Godzilla films, to stealing little details from other Toho monster and martial arts films, Tarantino never hid a thing.  He was sampling movies like a hip-hop producer samples old records for beats.
One of the movies he heavily sampled for the first half of Kill Bill was Lady Snowblood, right down to including its theme song in the soundtrack.  Luckily he changed a number of the circumstances of why the female lead wants revenge, or else Kill Bill might have looked more like a remake than an homage.  Still it is obvious that this is, without a doubt, the movie that was on his mind at the time.
Yuki (Meiko Kaji) is born in prison to a woman named Sayo (Miyoko Akaza).  Sayo's husband and child are murdered when the couple arrive in a village, and Sayo declares vengeance, passing that task onto Yuki at birth.  The child is trained as an assassin and then pursues the criminals who destroyed her family.  Along the way she meets journalist Ryurei Ashio (Toshio Kurosawa), who writes down the story of her life.
The story is based on a manga of the same name, and though it is a low budget feature that doesn't keep director Toshiya Fujita and cinematographer Masaki Tamura from making a beautiful, if over-the-top violent, film.  As can be expected red and white are the emphasized colors, with the occasional blacks or blues thrown in to contrast.  The blood effects are generally exaggerated, with sword blows causing unnaturally long showers of blood to erupt, but it soon becomes its own sort of art through patterns and the sound effects associated with it.
Yuki herself is supposed to be an asura, a demon in human form meant to take revenge in the place of the person who called her forth.  Although it is clear that she is not an emotionless killing machine, part of her ability to hide in plain sight is to be able to blend in with society.  While that's the idea, and the script definitely tries to pretend that she does, there is no way anyone with half a brain would think it was a good idea to get within 10 feet of someone with Meiko Kaji's dead-eyed stare.  Wisely, like most of the best protagonists, she doesn't speak much, and most of the exposition comes in manga form as a tribute to its source material.
Although many of the confrontations are quite exciting, the one thing I wish is that the criminals Yuki is taking revenge against were more of a challenge.  I expected the difficulty to amp up as she went along, and it does a little, but that is one of the places where Tarantino departed from this film; he knew that their had to be some challenge for the Bride as she encountered those that had wronged her.  While Yuki does face a challenge at the end, it's more of a surprise rather than an out-and-out battle, and is better suited to bringing a portion of the story to a close.
It is definitely an interesting, well-told story, even if the showers of blood may verge on comedy at times.  It has a unique and memorable style, and it is no wonder that it highly influenced Tarantino in making his epic revenge tale.  Of course Lady Snowblood is the better of the two. Kill Bill - at least the first part - is obsessed with being a spectacle of blood and violence, while Lady Snowblood is focused on the toll that a vengeful life takes.  Yuki is asked to sacrifice from the very moment she is born and, though he was supposed to leave her human side behind, she still has her emotions intact.  She has no mercy for those she kills, but it doesn't mean that she isn't aware of the life that she has been denied.  To get back to the analogy of sampling: many songs have been sampled to great effect, but without that emotional connection with the original, there would be no desire to sample it.  The same is true here.
Lady Snowblood (1973)
Time: 97 minutes
Starring: Meiko Kaji, Toshio Kurosawa
Director: Toshiya Fujita