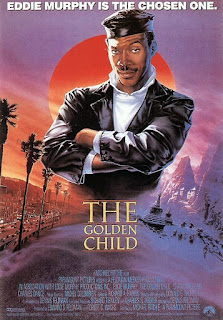 Eddie Murphy seemed like he was unstoppable in the 1980s.  48 Hrs., Trading Places and Beverly Hills Cop were all major hits.  They were also strong R-rated films, playing off of Murphy's stand-up persona of telling hilarious, vulgar jokes.  It turned out as an actor he knew how to regulate himself rather well, letting out the wild side when needed and reigning it in when necessary.  At the time he was big enough to even weather some bad ideas - like an album where he sang, rather than performing comedy.
He was also able to get past his first movie misstep.  The Golden Child wasn't a financial disaster, however it was not well-liked by critics, and probably would have gone the way of Howard the Duck without Murphy being in the lead role.  His name put the butts in the seats, but the movie had no lasting legacy other than as a punchline when telling jokes about Eddie Murphy's career.  As always with a number of films that fell to the wayside after the '80s were over it has frequently been given a second look - and, in many cases, quietly been put back on the shelf or taken in to trade for a Blu-Ray of Coming to America to try to forget that this happened.
Chandler Jarrell (Murphy) is a Los Angeles private detective that specializes in finding missing children.  He is contacted by a woman named Kee Nang (Charlotte Lewis) to find a boy called the Golden Child (J.L. Reate).  The child, who has supernatural abilities and is fated to save humanity, has been stolen by a shape-shifting demon named Sardo Numspa (Charles Dance).  Jarrell, it turns out, is the chosen one, meant to bring the child back to safety and thus ensure that the world does not become a hellscape.
According to Charles Dance the movie that we saw was nothing like what was originally made.  It was to be a pure fantasy action film, with an orchestral score by John Barry and a somewhat serious tone.  It was meant to be a departure for Murphy after playing similar characters in his early films and to keep him from being typecast.  Problem was, the damage was already done, and initial audiences responded negatively because they didn't get another movie with Axel Foley.  The Golden Child was recut, given a generic '80s score by Michel Colombier and Murphy tried to do his best within the confines of a PG-13 rating to do his usual schtick.
The rating which should have been a red flag in itself.  Although much more was allowed with that rating in its infancy, the limiting of one f-bomb was already there.  This leaves Murphy with little to do but mug and laugh - annoyingly, at that, and often at unfunny jokes that he just made.
The recutting of the film at some point left the whole thing a choppy mess that, while easy to comprehend, often just seems like like director Michael Ritchie was either just went ahead and spliced together a few shots of Murphy mugging for the camera while just splicing random scenes together.  For instance, why does Sardo Numspa have a problem with the letter "J", often pronouncing it in an Eastern European fashion?  He's supposed to be a Buddhist demon, so that makes no sense.  It also never leads to anything, despite the fact he can change into different people and different things.  I expected it to be a way that he suddenly stood out to Murphy when trying to disguise himself as one of his friends, but that never happens.  Also, while trying to play up Kee Nang as a strong female protagonist, for some reason she gets hosed down while wearing a white shirt with they meet the bikers.  She walks through the whole scene looking like a wet t-shirt contestant and not a word is spoken about it.
There are some good scenes that show how the movie might have been so much better.  Jarrell's walk through the corridor to get a magical dagger has him acting naturally rather than trying to ham it up, while his scene with Sardo on their arrival back in the United States is great.  What isn't is his cringeworthy performance at the airport in Kathmandu and an awful dream sequence where he meets Numspa for the first time.  Sardo's sudden transport to the realm of the dead and discussion with some sort of "dark lord" is well done, even if it also does not have any payoff, as is his transformation into demon form at the end as he pursues Jarrell and the Child.
It may be enough to entertain some people and make The Golden Child a sort of cult film, but cult film does not mean good film.  It doesn't even mean watchable film for many and, despite having Murphy alone in a theater showing The Golden Child in a classic In Living Color skit about Arsenio Hall stalking him, it is doubtful one would find Murphy ever even watching this of his own volition unless it is to remind himself to always have script control.  He thinks the movie is one of the worst he ever made, even though he was happy that it made money.
I watched it out of curiosity because it was one of the movies I had skipped of his back in the day, and I can only imagine how much I would have been disappointed back them.  He followed this up with the first sequel to Beverly Hills Cop, which wasn't great but at least wasn't this, and then one of his classics, Coming to America.  Thus, crisis averted, at least until Harlem Nights.
The Golden Child (1986)
Time: 94 minutes
Starring: Eddie Murphy, Charlotte Lewis, Charles Dance, J.L. Reate
Director: Michael Ritchie