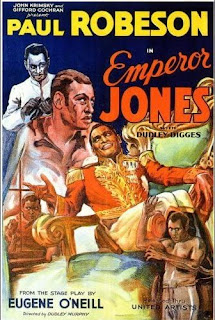 Watching The Emperor Jones these days, far removed from the impact that it had both as a play by Eugene O'Neill and as a starring vehicle for Paul Robeson, can be a bit shocking.  The movie is loosely based on the play, which itself used a certain pejorative throughout, and which is used in the movie as well.  It was released before the Hays Code went into effect, but still many of the scenes that would have elevated it from seeming like an exploitation film were cut, as were many of O'Neill's original intentions, much to the displeasure of Robeson.
What it did, however, was make Robeson a star at a time when black actors simply did not get leading roles.  He had replaced Charles Gilpin in the stage play, which had debuted in 1920, and thus was the natural choice for the role in the movie adaptation.  No matter what the opinion of the quality of the finished movie may be there is no doubt that Robeson gives it his all, and it was an important milestone.
Brutus Jones (Robeson) gets a job as a Pullman Porter.  He soon meets another porter named Jeff (Frank H. Wilson) who teaches him the ropes both on and off the train.  Jones soon falls for Undine (Fredi Washington), Jeff's lover, but he has ambitions of his own.  He moves up to working the executive cars where, by listening, he figures out ways of making financial deals rather than simply working for tips.  Unfortunately, Jones's penchant for gambling leads to murder, and he is incarcerated.
Eventually Jones escapes, killing one of the guards on his work duty, and flees the country.  Working in the engine room on a ship in the Caribbean, he jumps ship and heads for an unnamed island, only to find himself captured and jailed.  However, he is rescued by a trader named Smithers (Dudley Digges), and Jones eventually builds himself up to where he can overthrow the current dictator and place himself in the role, calling himself the Emperor Jones.  After two years of brutal rule his subjects rebel.
The play largely takes place as Jones tries to find his way through the jungle to safety, hoping to escape the island before the rebels catch him.  The story is told in flashbacks as Jones becomes haunted by his past, often firing wildly as various visions and ghosts taunt his feverish mind.  It was both the political aspects as well as the style of the play that intrigued Robeson when asked to replace Gilpin on stage.  The movie, in contrast, follows a linear path, providing Jones with more backstory and only alluding to the play in the last 12 minutes where Jones has a long soliloquy and is haunted by what visions director Dudley Murphy could get on screen.
This became a problem as, though the Hays Code was not yet in effect, censorship was already rearing its ugly head.  Dream sequences involving slave ships were removed, while Fredi Washington had to wear makeup to darken her skin to it would not look like Brutus Jones was carrying on with a white woman.  Originally the killing of the guard, already tame by modern standards, had to be cut down even more to avoid showing blacks rising up and being violent against whites.  The current version of the movie, assembled from several different 16mm versions, restored what it could, although parts of the original remain missing.  Robeson himself was not happy with the finished project as he felt it deviated too much from O'Neill's vision.
Thus, without many of the later scenes tying in the action to black American culture, parts of the film end up seeming unintentionally racist, particularly a beginning scene showing parallels between ancient African rituals and the lively services of the black Baptist church, as well as Jones's prejudices toward others of his race.  In being able to be more violent than later films it comes across as exploitive, perpetuating the myth of people of color returning to some sort of savagery when given the chance, when much of the context was meant to show the brutality that Jones displayed was related to prejudices and behaviors forced upon blacks since slave days by white society.
That said, for 1933 it was a brave step forward to have a black lead.  Robeson wasn't as unknown as he was when he originally took on the role, and he soon became one of the important actors, performers and activists of the time.  This was a period when Hollywood had no compunction of putting a white person in blackface to play a role, so The Emperor Jones could have ended up easily as an example of what not to do rather than as a turning point for black actors in movie roles.  Robeson especially shines toward the end when the movie does largely present scenes for O'Neill's play intact, but it also stumbles in this case of feeling too much like a stage play, something that many early sound films are guilty of.
This is a hugely flawed picture, both in its execution and the fact that a good portion is missing that changes the message of the movie.  That said it is still worth a look, both for Robeson's performance and for the fact that Murphy was willing to do more location filming than most American directors, thus making this feel less like it is confined to a studio than many of its contemporaries.  Despite its attempts to break free somewhat of its contemporary mores, it is still a movie of its time, and should be approached as such.
The Emperor Jones (1933)
Time: 72 minutes
Starring: Paul Robeson, Dudley Digges, Frank H. Wilson
Director: Dudley Murphy