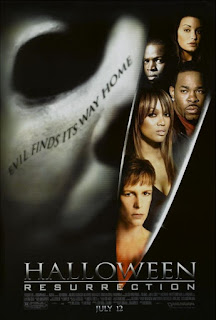 Halloween H20: Twenty Years Later brought Jamie Lee Curtis back as Laurie Strode and rebooted the series so nothing that happened after Halloween II counted.  This was refreshing, since over the course of time the series had managed to just get worse and worse as attempts were made to explain Michael.  Unfortunately, where it took the original series at least up to the fourth direct sequel to start truly getting bad, Halloween: Resurrection decided to bypass circling the drain and just dive right in.
Where it appeared at the end of the last movie that Laurie Strode (Jamie Lee Curtis) had finally killed Michael Myers (Brad Loree), it turns out that it wasn't so.  Instead of Michael, it was a random EMT whom Michael had switched clothes with.  Killing an innocent man supposedly drove Laurie into a catatonic state for three years.  This changes when Michael decides to show up at the mental hospital after visiting hours on Halloween of 2001.
A year later an internet entertainment company headed by Freddie Harris (Busta Rhymes) and his partner Nora (Tyra Banks) decides to set up a live show directly from Michael Myers's childhood home in Haddonfield, Illinois, using local university students Sara (Bianca Kajlich), Donna (Daisy McCrackin), Jen (Katee Sackhoff), Jim (Luke Kirby), Bill (Thomas Ian Nichols) and Rudy (Sean Patrick Thomas) as their stars.  Largely, they are supposed to wander around the house gathering "clues" and getting scared from the cheap props that Freddie and Nora have set up around the place.  Unfortunately, Michael himself decides to show up and add his own take to the proceedings.
About the only good thing that came of this movie was that it disappointed fans to a degree that there was no attempt to do another Halloween sequel until the 2018 version which again wiped the slate clean, ignoring every single movie except the first.  It serves director Rick Rosenthal right, since he was the director on the second, which was a major step down from the first, and responsible for the this one as well.  The worst part was cheating the previous movie out of a great ending, although Michael and Laurie's confrontation in the hospital is one of the few highlights of this film.
Really, there is nothing else.  There is Katee Sackhoff shortly before achieving fame as Starbuck in the Battlefield Galactica reboot, some gratuitous nudity from Daisy McCrackin and and a slightly humorous meeting between Busta Rhymes and Michael.  Unfortunately, all other attempts at humor fall flat, as does any attempt to be frightening.  It's back to knocking off sex-crazed kids in an old house, with a few meta jokes thrown in that were done better in Scream and even Rubber.
As much as this should have convinced everyone it was time to let the series go, I'm glad in the end that we got something better as a result and didn't have to put up with another five or six sequels on this level.  It still may not be as abysmal as The Curse of Michael Myers, but there's really no true reason to waste time with either of them.
Halloween: Resurrection (2002)
Time: 94 minutes
Starring: Busta Rhymes, Bianca Kahlich, Katee Sackhoff, Jamie Lee Curtis, Brad Loree
Director: Rick Rosenthal