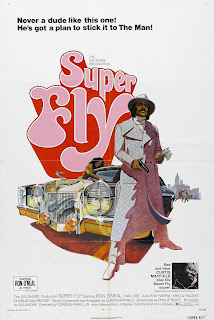 The Parks family, Gordon and Gordon Jr., were two of the most important figures in African-American cinema in the early 1970s.  Melvin Van Peebles may have proven a market for black film makers existed with Watermelon Man and Sweet Sweetback's Badasssss Song, but the senior and junior parks truly developed what would be called blaxploitation cinema with Shaft and Super Fly, respectively.
While the former showed us a new perspective on action movies with an independent black gaze, Super Fly presented us the opposite side of the law.  Gordon Parks Jr. filmed, often guerilla style, on the streets of Harlem, as well as in its tenements, bars, restaurants and even high-class apartment buildings.  It stirred up its share of controversy, particularly with the NAACP, for at times seemingly glorifying street violence and drug use, while at the same time showing the effects it had on everyone involved and pointing the finger directly back on the powers that be for flooding lower income areas with the substances that created a circle of hopelessness in the first place.
Youngblood Priest (Ron O'neal) is a moderately successful cocaine dealer in Harlem, working in partnership with his friend Eddie (Carl Lee).  Though it has allowed him to live a lavish lifestyle Priest wants out of the cocaine business, and hopes to do so by taking the earnings he and Eddie have saved and buying a large amount from Priest's old contact Scatter (Julius Harris).  Scatter himself is retired from the business, but reluctantly agrees to supply Priest with what he needs.  Priest hopes to make a million dollars through the sale over a four-month period, take his half and split.  However, a group of corrupt police who are the real source of the drugs are not too anxious for him to leave the business.
Ron O'Neal is certainly memorable, as is the Cadillac he drives (donated for the shoot by a pimp named K.C., who has a cameo in the film).  Though accused of promoting violence, the truth is Priest doesn't kill anyone throughout the film; in fact, he voices the fear that he may have to, and it's one of the reasons he wants out.  He uses his position of power to push certain people around and keep them earning, but rarely does he resort to violence except when defending himself.  The two deaths in the film are both a result of actions by the police. While Carl Lee and Julius Harris are both good in their roles, they do have trouble delivering some of the dialog, which honestly is not the best written.  The women in the movie, even more so than many other films in the genre, are largely just props.
At least at this point the senior Parks was the better technical director, although Parks Jr. is not afraid to take some chances.  The opening scenes, where it seems that the car that has the camera in it is getting more than its share of puzzled stares, combine the feeling of a bustling economic area pockmarked with scenes of urban devastation.  There are some handheld scenes during a chase that don't come out as well as I'm sure he would have liked, and there are times when it seems the film stock switches between 16 mm and 35 mm.  It's constantly feels as if the desire is there to do more than the meager budget will allow.
The most creative part comes during a montage of Priest's low-level dealers selling his product.  Done in still photographs to Curtis Mayfield's "Pusherman", O'Neal has stated his disdain for it since it appears to be an advertisement for cocaine, but it also tells its own story about how people of all walks of life are trying to escape the emptiness of their lives - although in the end it only shows temporary happiness, except for those on the earning end.
Although I still enjoyed Super Fly, what I did notice on a second viewing was how much filler the movie has.  There is action, there are important plot points and the music is great, but there are also large chunks of the movie where nothing happens.  Priest drives from one place to another, talks with one of his women, drives somewhere else, and little else occurs.  When we get back to the plot it seemingly has nothing to do with what we just saw.  There is a sex scene as well that is horribly shot and goes on for what seems like five minutes or more.
The movie was a landmark.  It was made by a largely black crew, filmed in a place most white film makers wouldn't go and made for around $58,000.00.  In the end it earned about $24 million, with the soundtrack alone becoming one of the biggest of its time and bringing in another five million.  It was successful enough that, though Gordon Parks Jr. decided to move on to other projects, Ron O'Neal himself directed the 1973 sequel Super Fly T.N.T.  A second sequel, The Return of Superfly, was released in 1990 with Nathan Purdee replacing O'Neal and directed by the original film's producer, Sig Shore.  Neither were as successful as the original, nor was the 2018 remake by Director X.  It was another example of the right film, at the right time, and certain elements coming together that made it better (or the memories of it better) than it should have been.
Super Fly (1972)
Time: 91 minutes
Starring: Ron O'Neal, Carl Lee, Julius Harris
Director: Gordon Parks Jr.