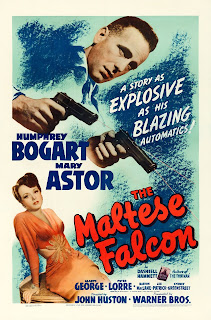 Sam Spade is among the most famous fictional private detectives despite being featured in only one full-length book: Dashiell Hammett's The Maltese Falcon.  He popped up in some short stories and a radio program that had Hammett's involvement, but everything one needed to know about the detective was contained within the one story.  Despite not being described to look anything like Humphrey Bogart, it is Bogart that one pictures when the name is said.  While he had a number of roles in crime films and Westerns under his belt, including some memorable ones, it was as Sam Spade that he finally got his belated star turn.
This was also a first for John Huston, who had been a scriptwriter for a while and got sick of actors deciding they knew better than him and having his work rewritten.  He also was not happy with either of the two adaptations of Hammett's novel that had been produced in the 1930s, and felt that he could do a lot better.  Warner Bros. wasn't so sure, so Huston was handed a meager budget to prove himself, and managed to both come in under budget but also give the world a movie that would be the cornerstone for an entire new genre known as film noire.
Spade (Bogart) and his partner Miles Archer (Jerome Cowan) are hired by a woman (Mary Astor) to trail a man she fears may do harm to her sister-in-law.  When Archer is killed and suspicion falls on Spade, he begins to look into what was behind the job, and finds that the woman was Brigid O'Shaughnessy, who with her lover doublecrossed an obsessed antiques dealer and crime lord named Kasper Gutman (Sydney Greenstreet) and her other partner Joel Cairo (Peter Lorre) to steal a jewel-encrusted statue of a falcon.
This is one of the early movies to feature what Alfred Hitchcock would later refer to as a "McGuffin," which is an object that is given some importance to get the action in the story going but ultimately is inconsequential in its conclusion.  While O'Shaughnessy, Gutman and Cairo worry about getting their hands on an object they think has high worth, Spade is willing to play along in his own way, although his only concern is untying himself from the knot of intrigue he unwillingly became a part of.
The poster is quite misleading, as Spade announces early on that he doesn't like guns and refuses to use them.  Humphrey Bogart has a physicality about him that doesn't make this as strange as it may seem, often easily besting Cairo as well as Gutman's muscle, Wilmer (Elisha Cook Jr.).  It is the tension between Spade and Wilmer that provides a good deal of the fun, although watching him play all the different sides until he finds out what he needs to know is just as enjoyable.  Spade loves a mystery, so it's no surprise that he falls for O'Shaughnessy and her seeming distress, which Mary Astor gets across quite well, especially when the façade drops.
While famous for getting the term "gunsel" past the censors, it really wasn't as subversive as stories make it out to be, as it seems Huston didn't really know what it meant either.  Besides, it did have other meanings than catamite, such as fall guy, which is what Wilmer becomes, and probably the reason Hammett used it in his book as a double entendre.  What is strange is how blatantly (for the time) homosexual Joel Cairo is, even though Peter Lorre, to his credit, doesn't camp it up or do anything that would be considered stereotypical other than have certain feminine affectations.  As for Gutman, other than the black bird being his white whale, we really don't get much of a read from him other than he lacks even the moral compass of O'Shaughnessy or Cairo.  Sydney Greenstreet, in his screen debut, certainly makes for a striking central villain, especially since we don't get any more back story from him than what is necessary.
John Huston, for his part, keeps everything as tight as possible, creating an atmosphere in which all the main actors could give their best performances while also moving the story along at a quick pace.  Partially Hammett and partially Huston, the dialogue in The Maltese Falcon still influences crime films to this day, and is certainly one of the go-tos (along with The Big Sleep and Double Indemnity) when anyone decides they want to do a classic detective parody.  It is one of the situations where everything came together right by design rather than accident, which is much rarer than one would expect.
The other thing I enjoy is that The Maltese Falcon flaunts a number of Hays Code rules while also cleverly staying within them and not making the requirements seem out of place.  Most of the film concludes off-screen.  What does happen on-screen, a final monologue showing Spade's moral dilemma when deciding what to do with O'Shaughnessy, is as brilliant as Bogart's scenes with Ingrid Bergman in the following year's Casablanca.  It is inevitable what he must do, but the conflict and pain is clear on his face throughout.  These performances are something that gets forgotten with all the imitations and parodies over the years.
The Maltese Falcon (1941)
Time: 100 minutes
Starring: Humphrey Bogart, Mary Astor, Peter Lorre, Sydney Greenstreet, Elisha Cook Jr.
Director: John Huston