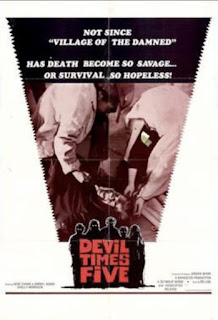 I have never been the biggest fan of creepy kid movies. I guess they have their place, but I usually don't find them creepy, but rather just annoyed that I have to watch a movie with kids in it that isn't The Goonies.  The only reason that I even slightly enjoyed Bloody Birthday was because of Julie Brown in her birthday suit.
The other thing I can say about Bloody Birthday is that it promised killer children and we truly got killer children.  Three of them in fact.  Devil Times Five promises two more, but for some reason forgets that the creepy kids are supposed to do something.  That is, until near the end of the film, when a different director took over and tried to save the whole mess.
Rick (Taylor Lacher) and his wife Julie (Joan McCall) head up to a house owned by Julie's father, and Rick's boss, Papa Doc (Gene Evans).  Along with them is Harvey Beckman (Sorrell Booke) and his wife Ruth (Shelley Morrison).  Harvey is hoping for a promotion, Ruth is hoping to drink the house dry and it seems like everyone, including Papa Doc's trophy wife Lovely (Carolyn Stellar) probably hopes he kicks at some point.  Little chance of that until a group of five kids happen to find the house after a van accident.  Unfortunately, the kids are from a local mental institution, and have their own ideas about how to play with the adults.
Leif Garrett, who a few years later became a teenage heartthrob and pop singer before sinking into z-list celebrity notoriety, plays David.  His sister, Dawn Lyn, plays one of the kids named Moe.  As it turns out, Carolyn Stellar is the mother of both, so this ended up being a sort of family affair - the one where mom has a catfight, flashes people and then is pretend murdered by you and your friends.  On top of that we have the most memorable of the children, Sister Hannah, played by a girl named Gail Smale who happened to also be the underage girlfriend of original director Sean MacGregor.
I say original director because, even though he is credited with the film, he is only responsible for about a third - including, I believe, the horrible slow-motion beating of the man from their hospital who comes to retrieve them.  When they capture him the film suddenly becomes black and white and everything slows for five minutes while they dispatch him in a poorly choreographed death orgy.  Having it go so slow just makes the fakery stand out more than anything.  After MacGregor got in a drunken argument with producer Mickey Blowitz, which ended with MacGregor punching Blowitz in the mouth, David Sheldon was brought in to direct the rest of it.  Problem is, by that time most of the snow was gone and they were filming in a different house.  Also, since Leif Garrett had gone on to make a marginally better film, he had to wear a silly wig for the rest of it.
Sorrell Booke gets top billing, even though it's a bit part.  If the name sounds familiar, he would find fame a few years later playing Boss Hogg on The Dukes of Hazzard, while Shelley Morrison went onto television fame as well.  That's really the only joy in watching this film, which is seeing a lot of people who were either big or slightly big stars later on in early roles, but even that joy is fleeting as most of them are wasted.  As for the actual movie, we get about 70 minutes of the adults hating each other, five minutes of the above-mention slow-motion beating and about 10 minutes of what anyone really would want to have seen this movie for.  Granted, once the slow-motion garbage is abandoned, a few good kills do happen, but it is too little, too late to have any emotional impact or to leave the audience with sense of unease that was intended.  The only unease that I have is that a really young girl had to put up with a sleazy director pawing at her.
Devil Times Five was not a big success, either under its original name Peopletoys or the revamped The Horrible House on the Hill.  They even tried calling it Tantrums, which is about what I would have had if I had been fooled into seeing this movie that many times.  Some like that it is a bit on the weird side, but for me it didn't really even have that going.  It was less weird and more dull, which for me is always the worst thing a movie like this can be.
Devil Times Five (1974)
Time: 88 minutes
Starring: Taylor Lacher, Joan McCall, Carolyn Stellar, Sorrell Booke, Gene Evans, Shelley Morrison, Leif Garrett, Gail Smale
Directors: Sean MacGregor, David Sheldon