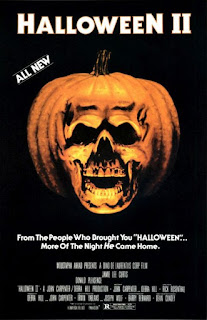 Although the recent Halloween has has given us a more worthwhile sequel to the original movie, the first attempt at a sequel was both an attempt to earn John Carpenter a paycheck (he didn't see much of a return early on from his 1978 film) and to get rid of the chance of him being asked to right another script with Michael Meyers in it.  He once again wrote the script with Debra Hill and, according to interviews, some help from his old Buddy Weiser.

Halloween II begins immediately after the end of Halloween.  Michael (Dick Warlock) has been shot six times by Dr. Loomis (Donald Pleasance), but got up and walked away.  Laurie Strode (Jamie Lee Curtis), severely injured in her encounter with Michael, is rushed to a hospital while Loomis and Shriff Brackett (Charles Cyphers) search for Myers.  The killer is first thought possibly dead after someone wearing a similar costume is killed in an accident, but it turns out Myers has tracked Laurie down to the almost deserted local hospital.  Once there he starts to dispatch everyone on his quest to get to Laurie, while Loomis makes a desperate attempt to get there and save her after learning that Laurie is in fact Michael's younger sister, given up for adoption when her birth parents died.

Director Rick Rosenthal, in his feature film debut, decided that it was best to keep things the way they were.  The first Halloween, rather than focusing on graphic violence, emphasized atmosphere.  Michael was largely in the background waiting his chance.  This time around he is more up front, having little to lose and some business to finish.  Still, many of the kills happen off-screen, and a good part of the tension is the fact that Michael is probably waiting in the wings at all times.  He is not dumbed down from the first film, but continues to be a cunning killing machine.

Unfortunately, there were some factors working against Rosenthal's vision of trying to recreate much of what made the original effective.  One of those factors was John Carpenter himself.  While Halloween was influential on an entire wave of slasher films, as always those that hopped on felt they needed to up the ante.  Carpenter himself, though declining to have anything to do with directing the sequel, ended up inserting some reshoots that involved nudity and more graphic violence.  Still, though it is a bit rougher than the original, the movie didn't really reach the heights of violence of Friday the 13th or its contemporaries.

Jamie Lee Curtis, though nominally the start of the film, spends most of the running time in a hospital bed in and out of a drugged state, and isn't really given much to do until the last third when she and Loomis make their final stand against Michael.  A good part of the running is watching security guards, nurses and candystripers walk blindly into dark rooms so they can get killed.  The most imaginative of these is one that would in some ways be considered to be the most cliched, as Michael kills EMT Budd (Leo Rossi) in shadow behind glass before scalding his girlfriend Karen (Pamela Susan Shoop) to death.  It's the closest to a typical Michael Myerss kill we get this time around.

Donald Pleasance chews the scenery a bit, but he kind of becomes a bit grating until he finally makes it to the hospital to confront Michael.  Other than the fact that making Laurie Michael's sister was a stupid idea (inspired, according to John Carpenter, by the reveal from The Empire Strikes Back), it seems that a lot of time was wasted just coming up with ways to kill people the audience couldn't care less about before getting to what people wanted to see, which was something to wrap up the first movie.  In truth, the first movie was wrapped up rather well, with Michael getting up and walking away being quite an effective and frightening ending without throwing in a few handfuls of exposition and an unneeded explanation for his killing spree. The movie isn't terrible, but it has nowhere near the appeal of the original, and serves as a mere coda.

That Halloween II did, however, was something it was never intended to.  It was intended to end the entire Michael Myers story and allow future Halloween films, like Halloween III: Season of the Witch, to focus on other stories.  What Carpenter and others didn't realize is that since they popularized the masked serial killer, and had him come back for a sequel, that they were now in the same boat as other slasher films in that audiences expected to see the same guy back again.

Thus, instead of bringing things to a close like it should have, Halloween II kicked off two different timelines: one where Laurie Strode passed away between films and Michael went on slicing and dicing, with the explanation being given that it was all due to a Druid curse, and a second where Laurie once again battled him 20 years later.  It was quite a relief to have things set back right with the latest movie.  I just hope that they do what this one couldn't, and that's get rid of him once and for all.