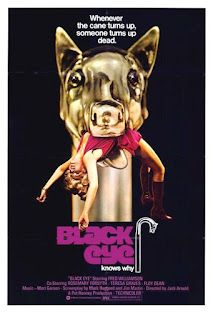 The blaxploitation genre did what it could to incorporate as many different classic movie styles as possible, from westerns to horror.  I'm quite sure that this was not originally intended to be, as Sweet Sweetback's Badasssss Song was more of an art film, while Shaft and Superfly were typical cop and gangster films, respectively, but produced to where they were more relevant to the African-American community.  Once things got going, and the demand for these pictures from both black and white audiences increased, it became like any other genre where getting new product out, no matter what the quality, was what mattered.
Also what mattered in most cases is getting a star, and Fred Williamson was one of the biggest, thanks to the Larry Cohen films Black Caesar and Hell Up in Harlem.  Being a former football player he had the physicality to be a convincing tough guy, but he also had the look of any normal guy one might meet on the street.  This everyday quality, especially when having to play the typical down-and-out schlub that makes up most old-time detective stories, helps when the genre this time around is the old-fashioned tale of a private dick navigating his way through the local criminal underworld as everyone searches for an object that obviously has value enough to kill over, but the why remains a mystery until the end.
The object in this case is a cane with a silver handle that was the signature of a silent film star named Marco Rollo.  The cane is meant to be buried with him, but it is snatched by prostitute Vera Brownmiller (Nancy Fisher) before the burial can be completed.  Ms. Brownmiller lives in the same dingy apartment building as private detective Shepherd Stone (Williamson), and he happens to come home just as a man named Chess (Frank Ashmore) has shown up to kill her and take the cane for himself.  After speaking with his old partner Bowen (Richard X. Slattery) Stone begins investigating the murder, and soon finds it ties in with one of his routine missing persons cases involving a girl named Amy Dole (Susan Arnold).
On the surface the movie isn't bad.  Williamson is a natural when it comes to acting, always having an aura of cool about him.  The use of the McGuffin to move the story along is tried and true, and there are a few decent fights and an okay car chase.  Director Jack Arnold, by this time, had spent more time directing television episodes and movies than in his heyday when he was making such films as The Incredible Shrinking Man, but he still does a decent enough job.  He may seem a strange choice for a blaxploitation film, and indeed his style doesn't fit as well here as it did in his second paring with Williamson, Boss Nigger, also released the same year.
What brings it down is that the script by Mark Haggard and Jim Martin, going off a novel by Jeff Jacks called Murder on the Wild Side, doesn't do anything new or outrageous with the usual private detective story.  Everything is by the numbers, with little of the strange nuances that push a lot of the better low-budget productions from the 1970s into the must-see category.  It seems like it is trying hard not to offend too much and hoping the majority of  the audience will show up just to see Williamson.  About as out of the box it gets for a movie for its time is featuring gay and bisexual characters, particularly Shepherd's love interest Cynthia (Teresa Graves), that are not there just for camp or shock value.
There are so many better movies with Williamson, as well as many that are worse but are at least memorable.  It's disappointing because he is good in the role, and it is a role that a series could have been made from.  Unfortunately, it's one of those movies that feels like it was made and shoved into theaters and drive-ins on a conveyor belt.  It's a missed opportunity to have really been the start of something good.
Black Eye (1974)
Time: 98 minutes
Starring: Fred Williamson, Teresa Graves, Richard Anderson
Director: Jack Arnold