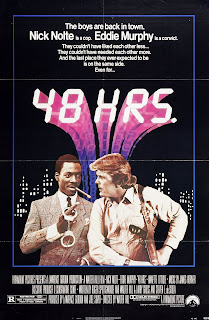 In 1982 Eddie Murphy was riding high on success from his time on Saturday Night Live and released a hit comedy album.  He was appearing on stage, had a novelty hit with "Boogie in Your Butt" and was the most popular young African-American comedian in the country.  The world was more than ready to see what he could do on screen when he was cast in 48 Hrs., a Walter Hill film of a script that had been floating around since the late 1970s and suddenly got the go-ahead.
Despite his success the producers of the movie still didn't know who he was.  Afterwards that would all change.  Eddie Murphy had his ups and downs, even in the 1980s, but by the time Another 48 Hrs. came out in 1990 he was top billed instead of Nick Nolte.  And this is where it started: a low-budget, violent crime drama in which Murphy injected his charisma and his comic timing to not only make him a star but also to start an entire '80s genre of cop movies.
Jack Cates (Nolte) is a disheveled, alcoholic San Francisco police officer with a reputation for violence.  Two of his fellow officers are killed by an escaped convict named Ganz (James Remar) and his partner in crime Billy Bear (Sonny Landham), the former of which also takes Cates's gun.  Cates is determined to both get his gun back and take care of the cop killers, and his major lead is Reggie Hammond (Murphy), who has six months of his sentence left for a robbery.  Ganz is out to retrieve the money from that robbery and Reggie may be able to help track him down, so Cates gets Hammond a temporary furlough for 48 hours to help find Ganz and Billy.
This was clearly supposed to be a vehicle for Nick Nolte to do his best Clint Eastwood impression - in fact, the role had originally been meant for Eastwood, who didn't really want to get stuck playing a cop again at the time - and Murphy, not having any previous feature film work, came relatively cheap.  Hill, for his part, let Nolte and Murphy play off of each other and improvise much of their dialogue, with the caveat that they were supposed to hate each other through most of the movie.  The idea worked, and although there was only one cop in the relationship and they didn't really become buddies until the end, it kicked off the whole run of "buddy cop" films where some scenario resulted in opposites having to team up to bring a master criminal to justice.
While this is the movie that opened the door to Hollywood for Murphy it should be said that part of his talent is the fact that he never upstages Nick Nolte.  Sure, Murphy is given his time in the spotlight, particularly with the shakedown of a redneck bar, but many of the more poignant moments are focused on Jack Cates and his struggles.  He is certainly on a downward spiral, and there is no sense that his friendship with Reggie may reverse it (or that it would continue once Hammond was out of prison), and it is refreshing that the only redemption Cates finds is in cleaning up a mess largely of his own making.
On the other side of the law, both James Remar and Sonny Landham overact as much as possible, but despite some hammy dialogue the psychotic quality in both comes through quite clearly.  We also get a weasley turn from David Patrick Kelly as Luther, another person who was involved in the robbery that knows where Reggie hid the money.  There is definitely no honor among any of the thieves, and 48 Hrs., though lauded for its comedic edge, is a full-on violent police drama that doesn't pull any punches when it comes to the action.
Walter Hill, as usual, keeps everything moving a good pace, although the scenes involving Vroman's tend to drag a bit.  It may flesh out both Reggie and Jack's characters, but there's only about three minutes of that in a 10-minute scene that seems mostly in the movie to throw a bone to the Bus Boys, who served as Eddie Murphy's warmup act for his stand-up tour.  They're good, but the main plot just suddenly comes to a halt for a bit before Cates and Hammond head to their final showdown with Ganz.
Although it was made with a small budget and a rushed schedule way back in 1982 48 Hrs. has aged remarkably well, mainly thanks to the performances.  If anything it may feel a bit more unique now as it doesn't follow the tried and true formula of the imitators that came after it, while it also feels a lot more immediate and real than many crime films today.
48 Hrs. (1982)
Time: 96 minutes
Starring: Nick Nolte, Eddie Murphy, James Remar, Sonny Landham
Director: Walter Hill