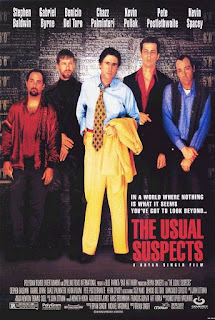 I wouldn't say that The Usual Suspects set the world on fire in 1995, but it was a slow burn and soon found its audience.  It does wear its influences on its sleeve, from classic heist films to the the non-linear story telling of Pulp Fiction, but it was a time when an independent director could find a distributor and eventually get a movie like this on the big screen.  There was also even the chance that it could stay there long enough to find its audience, and The Usual Suspects did.
This was the second movie with Bryan Singer directing and Christopher McQuarrie writing, with their first collaboration being the low-budget Public Access.  It also must be remembered that Kevin Spacey was not yet a household name.  Se7en came out the same year, but before that the biggest role he had was in The Ref.  The biggest names in the movie at this point were Gabriel Byrne and Chazz Palminteri.  Despite this, Spacey's role was written for him, as was Byrne's, and although there were a number of setbacks Singer and McQuarrie were able to get the actors they wanted for the roles.
When five guys are suddenly rounded up by the NYPD for a truck robbery - explosives expert Hockney (Kevin Pollak), career criminals MacManus and Fenster (Stephen Baldwin and Benicio Del Toro), reformed criminal Dean Keaton (Byrne) and small-time con man Verbal Kint (Spacey) - they spend their time while cooling their heals discussing a new job.  All, that is, besides Keaton, who is enjoying civilian life.  However, he eventually agrees and, when the job is done, accompanies the others to Los Angeles to make sure he gets his cut.  While there they are contacted by a lawyer named Kobayashi (Pete Postlethwaite) who informs them that he represents a notorious Turkish gangster named Keyser Soze, and that they are required to do a job for Soze in return for the times they unknowingly stole from him.  The story is told in flashback by Kint while awaiting release in Los Angeles and being interrogated by Dave Kujan (Palminteri), a federal agent who helped bring Keaton to justice in the past and is hoping to do so again.
While Spacey's turn as a deranged serial killer initially got him more attention in Se7en, he does a fine job of bringing Kint to life.  While Kint has physical disabilities, and he obviously has some mental deficiencies as well, he never comes across as mocking.  They are a part of him that he has lived with and, despite them, seems to have garnered some level of respect form those he works with.  It's a memorable performance, and it is also a low-key one, given that it is supposed to be a guy who runs off with the mouth a bit too much.  Most people would have played him as a typical lowlife character from an old police show, but Spacey gives him some dimension.
Speaking of dimension, despite Gabriel Byrne turning in a fine performance as an ex-criminal reluctantly having to get back into the game, Benicio Del Toro manages to steal a good deal of the movie simply by not being able to be understood.  The role was originally supposed to be played by an older actor, but Del Toro made Fenster his own and, again, surprisingly didn't overact it.  It's both a testament to Bryan Singer's directorial skill (there are so many great shots in the film that bely that fact as well) and the fact that he was willing to select the right actors for the job.  Stephen Baldwin's MacManus is more of the typical hothead, although unlike other movies of its type it doesn't let that get in the way of him being professional, while Kevin Pollak plays a guy who treats his criminal enterprises like someone would a nine-to-five job.
The one thing I have danced around, for good reason, is the ending.  The ending is definitely what made the movie, and Singer, famous.  Famous enough that, even though his next film was a rather underwhelming adaptation of Stephen King's Apt Pupil, he ended up directing four of the X-Men films as well as Superman Returns.  They are big-production films, much different than his first three, and it was definitely a smart move to not go the M. Night Shyamalan route of becoming known as the guy who puts twist endings in all of his movies.  That said, for a movie of this type it is definitely worth watching even when one knows how it is going to end.  Singer directed it in such a way that there are clues throughout on what will happen, and McQuarrie kept things simple enough that there doesn't have to be any convoluted leaps of logic to make sense of it all.
The major barrier to new audiences, besides the point of a twist ending in an influential 25-year-old film, is that there would be some reluctance to watch it given who is involved.  Both Bryan Singer and Kevin Spacey have been outed as sexual predators who used their influence, and their supposed protected status as members of the LGBTQ community, to get away with some reprehensible behavior.  The current trend is to disregard a body of work due to the bad behavior of some of the people involved, but I have been reminded more and more how important it is to separate the art from the people who create it.  The Usual Suspects is just as much Christopher McQuarrie's and Gabriel Byrne's film as it is Bryan Singer's or Kevin Spacey's, and it is still an influential part of one of the best decades of American film.
The Usual Suspects (1995)
Time: 106 minutes
Starring: Kevin Spacey, Gabriel Byrne, Benicio Del Toro, Kevin Pollak, Stephen Baldwin, Chazz Palminteri, Pete Postlethwaite
Director: Bryan Singer