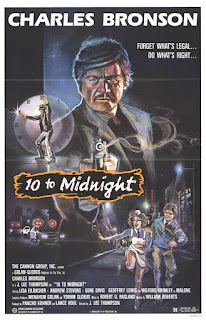 Charles Bronson was one of cinema's consummate tough guys long before he made Death Wish in 1974.  He starred in a number of westerns, including some of the best from Sergio Leone, as well as a number of war, crime and action films.  By the 1980s, although it had been eight years and a number of movies later, he was largely known for Death Wish, and the low-budget film studio Cannon was able to channel America's fear of rising urban crime into producing a hit sequel in 1982.  Though hated by critics, the movie was a hit with audiences, who were more than happy to see Bronson blow a bunch of criminals away.
Also with Cannon was director J. Lee Thompson, famous for making hit films in the 1960s like The Guns of Navarone and Cape Fear.  By the time he and Bronson started working together he had been making a string of b-movies, including famous slasher film Happy Birthday to Me.  10 to Midnight happened to be the first movie the two would work on together, and both Bronson and Thompson would go on to make a string of movies for Cannon throughout the 1980s, including the fourth Death Wish film.
Leo Kessler (Bronson) is a detective with numerous commendations and a storied career behind him.  Despite his renown within his department his career led to his wife divorcing him and an estrangement between him and his daughter Laurie (Lisa Eilbacher).  The two are forced to somewhat reconcile when Betty (June Gilbert), an old friend of Laurie's, is murdered by a serial killer that Leo has been hunting.  The killer happens to be a man named Warren Stacy (Gene Davis), an office worker and former co-worker of Betty's who has severe issues with women.  Kessler is working with a new partner, Paul McAnn (Andrew Stevens), who begins to fancy Leo's daughter.  Stacy, after being forced to deviate from his usual careful routine, gets on the cops' radar, but soon escapes due to Kessler's overenthusiastic pursuit, ultimately putting Laurie in danger.
Normally I would fault the way Gene Davis portrays Warren Stacy, as it sounds like he is regurgitating lines without any real idea of what he's saying.  It can come across as the typical bad acting one finds in a lot of b-films.  That some roles are not going to be filled with the best actors is something that is accepted in films like this, as great acting skill is not really the point.  After all, we are talking about a man who kills in the nude, and the typical tasteful Cannon style of making sure every woman they can contractually get to take their clothes off does.  Still, the robotic line reading seems to fit with Stacy.  Though handsome, his lack of being able to act like a normal human being automatically puts anyone off that he comes near.
Charles Bronson is not at his most enthusiastic, but even phoning it in he's still fun to watch.  Lisa Eilbacher and Paul McAnn both seem to be having fun, while Wilford Brimley shows up as Bronson's boss and collects his paycheck by being Wilford Brimley.  Where the movie does shine is that it takes a few unexpected turns, the least of which is introducing us to the killer quite early on.  It is clear that Bronson was cast in the role of Leo Kessler due to the vigilante aspect of the latter third of the movie in order to cash in on Death Wish II.
Surprisingly, the movie is still enjoyable to watch, especially if one is into the particular type of sleaze that Cannon attempted to peddle in between their rare box office hits.  I would not say it has aged well at all, but it is a good example of drive-in fare from the early 1980s.
10 to Midnight (1983)
Time: 101 minutes
Starring: Charles Bronson, Paul McAnn, Lisa Eilbach, Gene Davis
Director: J. Lee Thompson