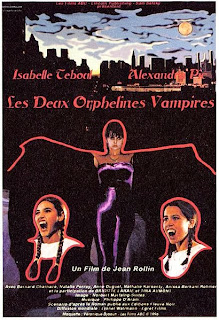 Louise (Alexandra Pic) and Henriette (Isabelle Teboul) are the favorites at an orphanage, known for their sweet nature and pitied by the nuns for their blindness.  Their affliction gains the attention of Dr. Dennary (Bernard Charnacé), who adopts the pair to both raise and study.

The girls, however, have a secret.  They are not always blind.  At night they can see just fine, although their world is in shades of blue.  They also have the taste for blood.

The girls have no idea of their origin.  What true memories they do have are of a life in New York and, in an attempt to fill in the gaps, imagine themselves to be Aztec goddesses.  Their previous lives have all come to an end due to what they refer to as "mishaps" when the locals discovered what they really were.

It also turns out that they are not the only denizens that wander through the night.  During one incarnation they meet a woman who lives in a train yard and imagines herself to be a wolf, while in their current they find another solitary vampire as well as a ghoul (Tina Aumont).  However, they find no more solace with their own than they do with humans, and soon things once again inevitably take their course.

I am used to Jean Rollin films from the 1970s, and it was with much interest that I went into this movie to see what he was doing in his later years.  Strangely enough, though this had many elements of his earlier films, one looking for over-the-top exploitation isn't going to find it here.  There are a few nude scenes, but nothing overtly pornographic or disturbing, and most of the violence is quite tame.  In many ways it was much more artful, reminding me in many places of my favorite Rollin film, The Iron Rose.

Unfortunately, one thing that does carry over from Rollin's earlier films is a tendency for characters to occasionally wander aimlessly.  While the Rollin's directing is quite striking, it is something one has to be prepared for.  For me, it caused me to have to rewind a few times after my mind drifted off.

Largely, though, it was great to see Rollin still following his muse, as the once prolific director only had a few more films to his credit before passing in 2010.