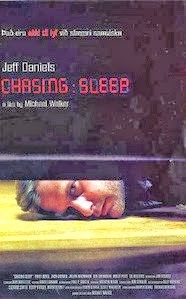 Ed Saxon (Jeff Daniels) wakes up to find that his wife Eve did not come home the night before.  Concerned, he calls her friend Susie (Molly Price) to find out if she's visiting her, but she's not, and Susie suggests that he call the hospital to see if she is there.  After finding out that is also a negative he contacts the police to file a missing person report.

All this happens at around five o'clock in the morning.  The next time that Ed is conscious of his surroundings is around three o'clock in the afternoon.  The university he teaches at is furious because he did not arrive for his class and Detective Derm (Gil Bellows) from the Seattle Police has been trying to contact him most of the day after finding Eve's car running near the home of one of her coworkers, a high school P.E. coach named George Simian (Julian McMahon).  Derm tells Ed to make sure that he answers his phone and to call if he remembers anything else.

Shortly after he receives a visit from Sadie Crumb (Emily Bergl), a student of his that is concerned that he missed class.  He fibs about his wife being missing and tries to get through the awkwardness of Sadie having an obvious crush on him until she suddenly collapses in his bathroom and gives herself a bloody nose after hearing what she claims was a woman screaming.  He sends her home with one of his wife's sweaters, and she leaves her bloody one under his bed.

The next visit is from George, who is concerned that Ed has done something to Eve.  George assaults Ed and then leaves, but not before Ed figures out that his wife has been having an affair.  The police arrest George and hold him for the assault, but want to further investigate Ed as parts of his story don't add up.  It turns out that his wife had been having an affair with George for over a year and was pregnant by him at the time of her disappearance.  A discovery of a diary detailing how much she hates Ed does little for his psyche and leads him to follow through on an abortive liaison with Sadie.

All the while Ed is taking any pill he can to try and sleep, as he cannot remember sleeping for a number of days.  In this state reality and dreams start to mesh as the truth about what happened to Eve slowly becomes apparent.

In the end this is less a traditional horror film and more an exploration of what anger and guilt can do to a person.  If you have seen Lost Highway then you probably know where this is headed, as it is pretty easily guessed from the beginning, largely from the heavy-handed symbolism of Saxon being trapped in a house full of groaning pipes and rotting walls.  Director Michael Walker throws in more than a few homages to David Lynch, filling the movie's sound track with all the sounds of the house rather than a musical soundtrack, through pacing - and through the use of Jeff Daniels in a very similar role to the one Bill Pullman played in Lost Highway.

Where the film succeeds is in its constantly unsettling atmosphere.  Everyone takes pills, there is no delineation between what Saxon imagines and what is real and the whole house seems alive with the evil that his mind tries to suppress.  Both Jeff Daniels and Emily Ergl do a great job with their roles.  Too bad the rest of the actors seem like they just grabbed whoever stepped on set.

In  the end the concept and the way the movie is made is much more interesting than the end result.