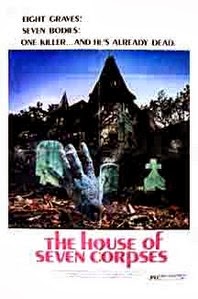 A film crew is making a low-budget horror film in an old mansion watched over by a man named Edgar Price (John Carradine) in which a number of the family members who have dwelt in the house have met horrible deaths.  The director, Eric Hartman (John Ireland) is basing the film loosely around what happened.

Although most of what is in the script was made up, at least some of the Beal family that inhabited the house appear to have been into black magic, as production assistant David (Jerry Strickler) finds a stash of books - among them, The Tibetan Book of the Dead.  The book becomes a prominent prop within the film, and Eric has his lead actress Gayle Dorian (Faith Domergue) read from it.

Soon, strange things begin to happen.  Gayle's cat turns up dead, strange rumblings are heard - and then a shambling corpse first murders Price and goes on to take out the rest of the cast and crew in ways resembling the different deaths suffered by members of the Beal family.

This movie would be absolutely laughable if it wasn't so tedious.  For instance, anyone with even the slightest knowledge of what the Tibetan Book of the Dead is knows that it's a guide through the afterlife in order to reach incarnation.  In the film, it has incantations mentioning Hebrew demons and the rivers of Hades - things that do not figure into Tibetan Buddhism whatsoever.  Plus, we have an old book with an English title on the outside, but which seems to be written in Latin on the inside.

And, thus, you have it for the rest of the movie.  Even when the dead begin to walk it is completely out of nowhere, and their motivations are never fleshed out.  Are they killing just to kill?  Do they want a hot blonde to share a grave?  Maybe they just want revenge against horrible cinema?  Wait, is there more than one corpse and, if so, where did the others suddenly go?

The answers escape me, and I think I'll just let them go.  I might care more, or might just have enjoyed the ride, if the pace wasn't glacial and the characters unlikeable.  And poor John Carradine and Faith Domergue having to work on something like this toward the end of their careers.