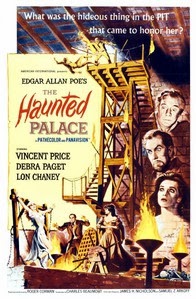 The village of Arkham is plagued by a warlock named Joseph Curwen (Vincent Price) who, along with his wife Hester (Cathie Merchant) and two accomplices is abducting young women to breed with the Old Gods to facilitate their return.  The villagers, at their wits' end, follow Edgar Weeden (Leo Gordon) to Curwen's palace, where they drag him out and burn him alive - but not before Curwen puts a curse on their descendents and declares that he will return

110 years later Curwen's great-great-grandson Charles Dexter Ward (also Price) arrives in Arkham with his wife Ann (Debra Paget), having inherited the palace.  The villagers, all descendents of the people who got rid of Curwen, are none to happy to see him - especially when they notice the resemblance to their local bogeyman.  Undeterred, the Wards decide to get a look at the ancestral home, even if they might decide to leave Arkham's unfriendly confines.

Upon arrival they find the mansion is largely left to abandon except by its caretaker Simon (Lon Chaney Jr.), who has tried his best to make it comfortable for the Wards' arrival.  However, strange things begin to happen almost immediately.  Charles's demeanor begins to change and he becomes insistent that they stay and make a go of it.

It turns out Joseph Curwen, far from finding his way down to eternal torment, has been hanging around waiting for the right person to possess and, after a series of failures, succeeds with Ward.  However, Ward does his best to fight him - a losing battle, since Curwen is quick on pulling out the Necronomicon in an effort to resurrect Hester, and it turns out that Simon and Jabez (Milton Parsons), the other accomplice, have managed to last through the years as well.

As for the villagers, they are plagued down the generations by mutant children, the results of Curwen's experiments.  They must also now face the revenge planned by Curwen, which is for them all to suffer in the same way he did.  He also has designs on having a little bit of non-consensual fun with Ann, who recognizes that it is no longer her husband and, when an attempt to send her away fails, he decides to make her the first in a new round of experiments.  However, as before, the villagers of Arkham aren't going to stand by idly.

Though "The Haunted Palace" is definitely a poem by Edgar Allen Poe, and is recited with great effectiveness by Price in places throughout the film, this is actually an adaptation of H. P. Lovecraft's "The Strange Case of Charles Dexter Ward".  Roger Corman wanted to to change things up by going for a different horror writer, but American International decided that it was best if they kept the Poe theme going.  Surprisingly, this is one of the better movies based on Lovecraft material, even if it does swing widely from the original.

I am surprised that this isn't up there with The Fall of the House of Usher and The Pit and the Pendulum when people talk about the Corman/Price films of the 1960s.  Price does a superb job in both roles, Chaney is sufficiently creepy and there are great performances all around.  There is also a great scene featuring the scarred and mutated offspring of the villagers confronting Ward in town.