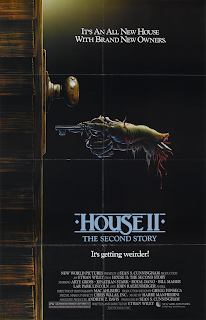 Jesse (Arye Gross) inherits his family residence after 25 years living with adopted parents.  On the night that he was given up, his real parents were killed by a zombie named Slim Razor (Dean Cleverdon), who was looking for a skull that had been passed down through the family.  Turns out Jesse's great great grandfather (Royal Dano), a notorious outlaw for whom he was named, found the skull and decided to keep it out of Slim's hands.

Shortly after moving into the house with his wife Kate (Lar Park Lincoln), their friends Charlie (Jonathan Stark) and Jana (Amy Yasbeck) show up.  Amy is an aspiring singer, and is hoping that Kate can use her connections to get her a record deal - a gamble that pays off.  However, Charlie and Jesse have a different concern.  Jesse figures out that the skull is buried with the elder Jesse, and the two dig him up - only to find out that he's still alive, and ready to go out on the town.  "Gramps," as he likes to be called, places the skull on a pedestal above the fireplace and warns Jesse to make sure no one touches it.

This turns out to be a challenge, as the skull seems to send off beacons throughout time, enticing people to search for it.  The first comes in the form of a stone age warrior, who crashes a Halloween party and takes it back to his jungle camp - which happens to be located in an upstairs room.  Jesse and Charlie retrieve it, only to have it stolen by a pterodactyl, facilitating Jesse to climb up and get it.  Unfortunately, one of the pterodactyl's chicks have hatched and it isn't giving up its prize.  Jesse struggles and then falls, crashing through several floors of the house and bringing back the skull, the baby pterosaur and a reptilian/caterpillar/dog thing that becomes Gramps's new pet.

Their victory is short-lived, however, as Gramps is ambushed as he goes to place the skull back in its place by a group of Aztec warriors that have crawled out of the fireplace.  So, another rescue mission is in order - this time with the aid of an electrician named Bill (John Ratzenberger) who seems to be a bit more than he appears.

Of course this all leads to a final showdown with Slim, who is also out to get the skull for himself.

The first House is a bit of a cult favorite, and I reviewed it for 2012's October Horror Movie Challenge.  It was decent, but I found myself disappointed.  Much of what I thought I remembered from the movie didn't happen, and even without the barely remembered scenes I felt it fell rather flat.  This one, however, has much of the randomness and just plain silliness that was missing from the first one.  Sure, nothing here is scary.  Without the supernatural elements it would be an adventure story.  I understand why a number of horror fans were upset about this one being a bit more on the tame side, but I enjoy it much better than the original.

The whole jungle scene is well-done, as are many of the effects.  I know how cheap they look, but I love cheap '80s effects; they don't draw one out of the film as much as when someone gets digital effects wrong.  And to me that death horse of Slim's looked excellent.  Another plus is Ratzenberger's completely random appearance which saved the weakest section of the movie.

It may be light-hearted, may not be scary, but it's still tons of fun after all these years.  Anyone know if Aztec women really did have '80s hairdos?