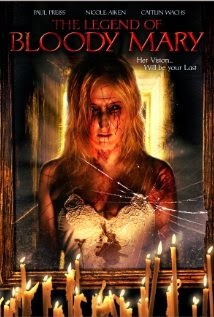 Ryan (Paul Preiss) has been suffering nightmares ever since the disappearance of his sister Amy (Rachel Taylor) five years prior.  Now a senior in college it is affecting his relationship with his girlfriend Rachel (Irina Costa) as well as his ability to attend school.  It seems that Amy and her friends were taken by Mary Worth (Caitlin Wachs) while playing a game similar to Bloody Mary, only where they write their name and the names of others they wish to "mark" on the mirror before summoning her.

The increase in Ryan's nightmares corresponds with the finding of a mass grave on campus that may provide validity to the legend.  Mary Worth is accused of adultery in the 1600s and refuses to reveal the name of the father of her illegitimate child.  The father also refuses to take responsibility, resulting in Mary being shackled to a tree and repeatedly cut across the face with broken pieces of a mirror until the silent husband finally kills her - and then later kills everyone in the village to present Mary's curse from coming true.  It seems she used the last of her life essence to transport herself into a world inside the mirror.

Father O'Neal (Robert J. Locke), a former professor of Ryan's, decides to help him out and begins to believe that the legends are true.  With Ryan's help he begins to devise a method of ending Mary's reign of terror forever.

I have had a surprising run of good to great movies this year.  Still, all good things must come to an end, as it does with an audible crash while watching this.  I honestly would rather watch a group of street mimes perform an unabridged King Lear set against a background of moose flatulence than ever be subjected to something like this again.  The acting seems like everyone involved was given a chance to read their lines once, handed a quaalude and told to recite it in one take.  Honestly - we're not taking purposeful detached acting like in a David Lynch movie, but something that could have been accomplished just as easy with those creepy pre-made cartoon bots with robot voices that people like to play with.

What's worse is that if some thought had been given to hiring decent actors and maybe taking more time to learn to direct beyond simply reading the instructions that came with the camera, a polished up version of this would make a decent movie.  You've got the usual horror revenge themes, some characters that could have been entertainingly campy if played right and the possibility (ruined in this movie, of course) of auxiliary villains. Instead, we get the type of thing that justifies the love many of us have for some of the worst directors.  We can point to movies like this as evidence that at least they didn't make this.