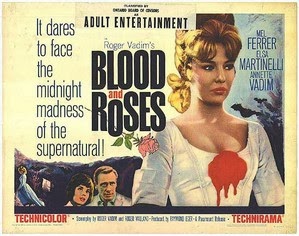 Count Leopoldo de Karnstein (Mel Ferrer) is preparing to marry his fiance Georgia (Elsa Martinelli) at the family's ancestral home in Italy.  Also attending is his cousin Carmilla (Annette Stroyberg), the only other living Karnstein.  Besides bearing a striking resemblance to her ancestor Mircalla, she is secretly in love with Leopoldo, but decides to keep it to herself.

During a celebration prior to the wedding a fireworks display is planned, and the pyrotechnician Ruggieri (Alberto Bonucci) plans to set them off in the old abbey where the Karnsteins were once entombed.  This concerns a number of the locals because, up until the 18th century, the Karnstein family was thought to be made up of vampires that fed on the local population.  After the fireworks set off hidden arsenals of explosives left over from World War II, a tomb opens and Carmilla is drawn by the voice of Mircalla, the latter taking over the former's spirit and possessing her body.

Once free, Mircalla's goals are twofold: obtain blood to sustain her, which she does from Lisa (Gabriella Fannon), and take over Georgia's spirit so that she may have Leopoldo.  Not only did Carmilla love him, but Mircalla believes that he is the reincarnation of the lover that was unfaithful to her.  Once Leopoldo realizes what's happening, it is a question about whether Carmilla is possessed by a supernatural force or just driven mad by her unrequited love.

I read Sheridan Le Fanu's novella Carmilla a number of years back.  Much of what is in the story had a heavy influence on a more famous vampire story, Bram Stoker's novel Dracula.  It is much the same fashion, with some underlying lesbian tones that are rather daring for the time.  It is an effective story of a girl slowly being turned into a vampire by the titular character who dwells in a tomb nearby.  Somehow, all the filmmakers that have taken a swing at it have never tried to capture the feeling of the story.  Theodore Dryer's Vampyr, as artistic an achievement as it is, barely used the story as a touchstone, and Hammer played up the lesbian angle in their adaptations.  That angle is definitely here between Carmilla and Georgia, and that's to be expected since director Roger Vadim never shied away from controversy (famously pairing real-life brother and sister Jane and Peter Fonda as lovers in his segment of Spirits of the Dead).

However, once again, Vadim barely uses the source material.  Le Fanu meant it as a straight horror story, while Vadim, like Dryer, uses the material to place his own artistic stamp on it.  The main theme is unrequited love, but it largely comes across as a more convoluted take on the usual evil creature after the reincarnation of their last love.  Despite its attempts to be daring, in large part the movie still feels like it is stuck in the 1930s.

The good parts are where it forgets trying to make some sort of point and going for just straight art on film (in Georgia's dream sequence) or a good scare (the blood showing up on Carmilla's white dress, which she can only see when she looks in a mirror).

It is a decent film, but Vadim is way too reserved for his own good, and probably would have been more effective making a more faithful translation of the story.