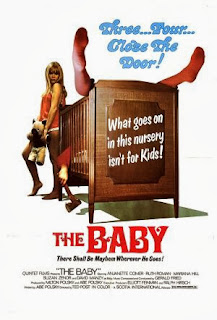 Ann Gentry (Anjanette Comer), a social worker for Los Angeles County, decides to look into a strange case involving the Wadsworth family.  On welfare for years, the family consists of Mama Wadsworth (Ruth Roman) and her three kids by three different men: Germaine (Marianna Hill), Alba (Susanne Zenor) and Baby (David Mooney) - the latter so named because, despite being 21 years old, he has the mental capacity of an infant, and the family keeps him in a crib and treats him like he's a year old.

Ann believes that there is severe parental neglect behind Baby's state, and that he in fact is capable of mental growth.  Despite orders from her boss and the fact that at least one social worker has disappeared she continues to pursue the case to the point of threatening to become Baby's new guardian.  However, Ann herself may have her own hidden agenda.

The plot is rather simple, but there is much here that I can't go into without spoiling the whole thing.  I went into this at first thinking that Baby was going to be some demented killer in diapers.  What I got was much better.  Both Comer and Roman's performances are above average for this type of film and, strangely enough, it manages to be creepy and disturbing while sticking within its PG confines.  Also a good job by the writers in not having Baby suddenly up and walking around and going the vengeance route.  That would be what one would expect toward the end, but in this case the ending is much more satisfying.

Happily, this is being rediscovered by many horror fans.  It maintains a level of tension throughout and, yes, there is a bit of blood toward the end.  It's also one of those things you'll never see anyone try to put on film again, so enjoy it in all it's 1970s glory.