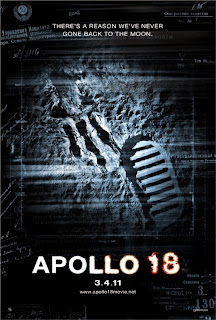 In 1974 the cancelled Apollo 18 mission is reactivated with astronauts John Grey (Ryan Robbins), Ben Anderson (Warren Christie) and Nate Walker (Lloyd Owen).  The mission is top secret and appears to be an effort to put cameras and listening equipment on the moon in order to keep an eye on the Soviet Union.  However, soon after setting up the equipment, strange electrical interference begins to play havoc with their communications.  It also appears there may be something moving around on the surface.

The suspicion is compounded when Anderson and Walker find an abandoned Soviet lunar lander, with the dessicated corpse of the cosmonaut in a cave nearby.  They soon begin to find the cameras they set up are destroyed, and their attempt to leave the moon is hindered by something attacking the ship.  Soon, it's not just the ship, but also Nate is attacked by something that gets into his suit as well as into him.  It quickly becomes clear that the cameras were put there to observe whatever is on the moon, not the Russians, and that the astronauts are merely an expendable sacrifice.

This movie sure got it from critics and the public when it came out, though it was one of the most successful movies of its year; 25 million from a five million investment.  It probably would have a better reputation if it had not suffered from a backlash against "found footage" films.  If not filmed in that style it probably would have got some notice as a decent speculative film that owes more than a little to Alien, but in truth so do most sci-fi horror pictures.  The interspersing of actual NASA footage from the time with current effects does a great job of portraying the lunar surroundings, and in a departure from the genre the jump scares are kept to a minimum.

What I do have a problem with is the confusion about hearing certain sounds.  I'm used to this in most sci-fi films where they add sound in space despite the fact that there isn't a dense enough medium for sound to travel through.  Same with the moon; recent discoveries show it may have an occasional, tenuous atmosphere, but never anything that sound could travel through.  I'm sure certain sounds could be heard in the space suits, but there are way too many incidences of there being sound where nothing should be.  It's as if someone at the last moment got scared that the normal person would get bored without the usual sci-fi trappings.

I also like the way it was filmed with lenses from the time and occasionally looks like film from that time.

It's just too bad that it got lumped in with another movies that were similar in filming technique but not in content.