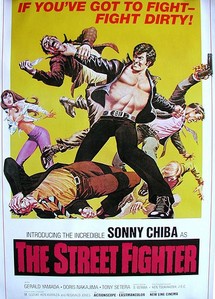 If you have seen the movie True Romance, there is a scene where Christian Slater and Patricia Arquette go to a marathon of Street Fighter films.  Despite being directed by Tony Scott, True Romance was in every other way Quentin Tarantino's second film, as he wrote it and it largely appeared on the screen as he intended.  Unless I am forgetting some references from Reservoir Dogs, it is also the first of his movies to introduce his love of Asian cinema, particularly the more exploitative and violent side.

Terry Tsurugi (Sonny Chiba) disguises himself as a monk to break convicted killer Junjo (Masashi Ishibashi) out of prison.  With the help of his sidekick Ratnose (Goichi Yamada) he succeeds, but Junjo's brother Gijun (Jiro Yabuki) and sister Nachi (Etsuko Shihomi) fail to pay him for the job.  A fight ensues, and Gijun dies when he accidentally flies out a window.  Because of their failure to pay, the man who arranged the deal, Renzo Mutaguchi (Fumio Watanabe) sells Nachi into sexual slavery.  Mutaguchi then offers Terry another job: kidnap Sarai Chuayut (Yutaka Nakajima), an heiress to a large oil fortune, so that the Yakuza can force her to sign the company over to them.  He refuses due to the Yakuza involvement, and they put a hit out on him.

Terry decides instead of going through with kidnapping that he will prove himself the best bodyguard for Sarai, and does so by fighting her uncle Kendo Masaoka (Masafumi Suzuki) to a draw.  Masaoka then recognizes Tsurugi as the the half-Chinese son of a karate master he knew during the war who had been executed.  Masaoka agrees, but before they can properly set plans into motion, Terry and Ratnose are attacked by the Yakuza and delayed, resulting in Sarai's kidnapping.

Meanwhile, Junjo has traveled to Hong Kong, where he crosses paths with local mob leader Dinsau (Rin'ichi Yamamoto), and finds Nachi as a newly arrived prostitute.  His sister tells him what happened with his brother, and Junjo joins Dinsau in allying with the Yakuza with the agreement that he will be the one to kill Tsurugi.

Terry and Ratnose succeed in briefly rescuing Sarai, but it leads to Terry's capture.  He escapes, but Sarai is quickly recaptured and taken to a boat where she is forced to sign over her fortune.  However, Terry tracks them down, and will do anything to complete his mission - even though a final battle with Junjo awaits him.

As I said before, this movie focuses on the action and the fights, relishing every violent moment.  There is a sudden X-ray shot of a man's skull being fractured, Terry castrating a rapist with his bare hands and many, many inventively violent brawls, including one with a blind swordsman in a sort of tribute to Zatoichi.  It is easy to see why the MPAA gave this an X (which at the time did not specifically mean pornography), but it isn't as shocking these days.  Not that violence itself seems tame, but it's the typical '70s effects - blood that is extreme bright red and almost the consistency of paint, as well as certain "organs" obviously being meat by-products.  Still, it's not the fake blood we're here for.  Sonny Chiba may not be as elegant a fighter as Bruce Lee, but he his fighting style is much more down to earth.

The movie does have some problems that are distracting.  Ratnose is one of the most annoying sidekicks ever (although Pin Boke in the sequel tends to be worse).  I get that Terry rescued him out of pity at some point, but cannot understand how he adds much to their partnership, as he isn't even skilled in the brains department.  He's largely comic relief, but his braying voice (at least in the dubbed version) makes him as funny as Jar Jar Binks.  In fact, I wouldn't be surprised if this was the character Jar Jar was somewhat based on.

Another problem is something more people would recognize if this were an American film.  The only Black character in the entire movie is a sex-crazed rapist.  I think there could be some credence given to the fact that he's meant to represent a negative American stereotype rather than a racial one, but for Western viewers it is a difficult portrayal due past (and, sadly, sometimes current) prejudices in our society.  As said before, it is a pivotal moment from the film and one that earned it the reputation it has, so it's not something that can be ignored.

I still enjoy this movie for what it is, which is a thin plot set up so that Sonny Chiba can spend 90 minutes beating the crap out of bad guys and look like a force of nature doing it.  He went on to do two direct sequels to this, have a part in the spinoff and be a successful actor in his native Japan for over four decades.  And, back around to Tarantino, he appeared as master Okinawan swordsman Hattori Hanzo in the Kill Bill films.