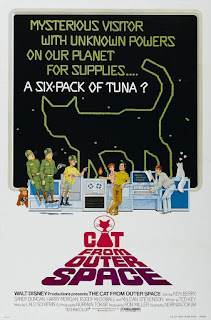 If there was one thing that Disney was for the longest time it was dependable.  Their releases, whether animated or live-action, were going to be light, family-oriented affairs.  This was perfect for the 1950s and a good portion of the 1960s.  Problem is, as the 1970s wore on, it was obvious that a good portion of the nation had outgrown the entertainment that the studio had to offer.  Tellingly, The Cat from Outer Space would be one of its last G-rated live action films.
Not only had society and the world changed, but so had audiences and movies themselves.  By 1978 Star Wars was the biggest science fiction adventure movie, and a year hadn't tempered that.  On the other side, for those who took their sci-fi a bit more seriously, there was Close Encounters of the Third Kind.  People like George Lucas and Steven Spielberg were winning the hearts and minds of children and adults alike.  Though generally non-offensive, they weren't afraid of appealing to a multigenerational audience.
Disney would soon jump belatedly on the bandwagon, and in fact The Black Hole was already in production.  Still, the studio decide to squeeze a little more of that old-school Disney style out while still hopping on the science fiction train with The Cat from Outer Space, a comedy largely aimed at a pre-teen audience but, thankfully, being kid-free itself.
Zunar-J-5/9 Doric-4-7 (Rumple / Amber / Ronnie Schell) becomes stranded on Earth when his spaceship suddenly develops issues.  His landing attracts the attention of a military unit led by General Stilton (Harry Morgan), which confiscates the ship and calls in a number of scientists to look at it.  One is Frank (Ken Berry), whose theories are laughed out of the room, but tend to get the visitor's attention because they are pretty much correct.  Problem is, the alien looks like an ordinary house cat with a diamond collar.
Unlike a normal collar, this one allows the cat to communicate and manipulate its environment, and it soon contacts Frank, who names the cat Jake before he knows it's an alien.  Turns out Jake needs a significant amount of gold to get his ship working again, and along with Frank's love interest Liz (Sandy Duncan) and fellow scientist Link (McLean Stevenson) he attempts to get Jake what he needs.  Meanwhile, General Stilton begins to realize who the alien really is, and a low-level clerk named Stallwood (Roddy McDowell), who happens to be a spy for the megalomaniacal Mr. Olympus (William Prince), hopes to get ahold of Jake's collar.
The Cat from Outer Space is light entertainment at best, and was often played once or twice a year on network stations as it was something that kids could watch without worrying about the content.  Norman Tokar does a pretty decent job at keeping things moving, although occasionally the pace could have picked up.  There was no need for it stretch out as long as it did, since this was tailor-made to be a nice 90-minute comedy.  For a G-rated film it is surprisingly entertaining, and has some great stunt work toward the end involving a runaway helicopter and a beat-up biplane.  Everyone does a great job, with Morgan pretty much playing a parody of his role in M*A*S*H and McLean Stevenson playing the loutish next-door neighbor.  Ronnie Schell does some excellent voice acting as Jake, and either Rumple and Amber had a good trainer or Tokar had a good editor.  Ken Berry and Sandy Duncan play the usual eccentric, slightly bumbling leads, but of course the cat is the focus.
The problem is that the movie doesn't feel like it was made in 1978.  This feels like something from about 1963, despite the contemporary surroundings.  I remember seeing it on television, not in a theater, and I strangely have a pretty good recollection of what I saw on the big screen, and if I had been asked I would have said that maybe this came out I would have said the 1960s.  Same with the Witch Mountain movies made about the same time.  Even in the 1970s, and even as a child, these felt old.  Anything Disney made at the time that wasn't animation just felt like it was completely out of step with the decade.
That said, even though this was aimed at the junior high crowd when it came out, it's more likely to appeal to nostalgic adults today.  It runs too long to keep most children's attention, and it is too old fashioned to get them interested in the first place.  It doesn't mean that The Cat from Outer Space isn't fun to watch occasionally, as most of the humor holds up (and, truthfully, works better as an adult) and I, at least, never get tired of watching a cat.  Just wish that tacked-on ending wasn't so hackneyed.
The Cat from Outer Space (1978)
Time: 104 minutes
Starring: Ken Berry, Sandy Duncan, McLean Stevenson, Ronnie Schell, Harry Morgan, Roddy McDowell
Director: Norm Tokar