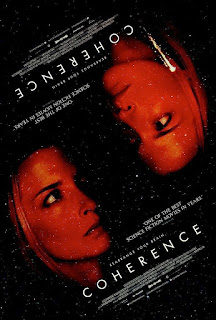 Sometimes it is worth it just to stick with a film and see where it goes.  I am not saying this just because Coherence is a low-budget science fiction film that relies more on ideas than a larger budget film would; Coherence is definitely a lot less complicated to follow than Primer's twisted timelines.  It is because early on the question cropped up in my head of, "Why am I watching a bunch of people I hate snipe at each other?"
I usually don't mind this as much as others, since most of the films or programs I watch there is some sort of evolution to the characters respecting each other, or onto other action other than having group of West Coast elites make snarky comments over wine and avocadoes.  I have seen enough movies of this type to know that, unless someone does something really stupid and dies, we are basically stuck with this group and this location.
Happily the runtime is short enough that director James Ward Byrkit pushes past this and gets to the important parts rather quickly.  All I knew at the beginning was that "strange things" would be afoot.  Also, rarely do I start a movie and not finish it, and stick with this I did, much to my delight.  Also to my delight was that the opening scenes establishing the characters, as much as I despised them, were quite important to what happened as the events move along.
Four couples join each other for a dinner party on the night that a comet is passing close to Earth: Hosts Hugh (Hugo Armstrong) and Beth (Elizabeth Gracen), their good friends Michael (Nicholas Brendon) and Lee (Lorene Scafaria), Em (Emily Baldoni) and her boyfriend Kevin (Maury Sterling), and their mutual friend Amir (Alex Manugian) who is bringing his current girlfriend Laurie (Lauren Maher).  In addition to the tension caused by Amir and Laurie's late arrival, the latter used to date Kevin and is highly disliked by Beth.  Emily's dance career is failing, and she's not too happy about Kevin heading to Vietnam to do charity work.  Meanwhile, Michael's acting career is almost non-existent, causing him to drink too much and act out when he does.  Beth is filled up with new age ideas, including holistic medicine and feng shui, which her husband barely tolerates.
The party goes as expected - everyone trying to be civil and make it through the night - until the fact is brought up that Em's phone shattered while she was talking to Kevin.  It turns out everyone's phone is broken, and Hugh decides that he should call his astrophysicist brother, who said to contact him if anything strange happened.  Unfortunately he does not have a landline, and the power soon goes out.  Seeing another house lit up near by he and Michael make the trip over to see if they have a phone, and return instead with a box full of pictures of everyone in the home and a strange tale - when they looked in the windows of the other house, they saw the remaining guests.  As the night moves on it becomes clear that they are trapped in a pocket reality with different versions of themselves.
The dialog was largely improvised throughout, with Alex Manugian (who was also the cowriter of the basic story along with Byrkit) guiding the rest of the actors and keeping them on point.  It was filmed in a short period of time, and besides the comet and some trick photography in the rare instances when people need to interact with their doppelgangers it is largely effects free.  They do get the ideas of quantum coherence and incoherence mixed up, but it's excusable as we are hearing explanations from characters that are not scientists, but whose only understanding about what is happening comes from a book that Hugh's brother accidentally left behind.
Early on it seems like there is no reason to care about the characters we meet, but as it goes on and we find out more about the slight variations from world to world it becomes much more important.  Although barely scratching the surface of the concept of multiple worlds what does happen as a result of the actions of every version involved leads to questions that go beyond the mere science and into the consequences of what occurs.
So, in the end, Coherence is definitely worth sticking with and pondering.  I am surprised to see comets this far down the line in our history still used as omens or magic objects (even if it's a kind of scientific magic), but it makes for a unique and interesting move none-the-less.
Coherence (2014)
Time: 89 minutes
Starring: Emily Baldoni, Maury Sterling, Nicholas Brendon, Lorene Scafaria, Elizabeth Gracen, Hugo Armstrong, Alex Manugian, Lauren Maher
Director: James Ward Byrkit