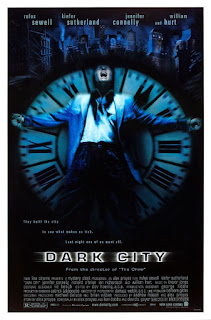 I honestly don't know why I originally saw Dark City, other than maybe my wife and I agreed it looked interesting.  I think I had seen Rufus Sewell in a television program and, talented as she is, Jennifer Connelly was never the biggest reason I would go out and see a film.  I didn't even know Richard O'Brien was in it until I recognized him as one of the main bad guys.  Also, this was Alex Proyas's second feature film - his first being The Crow, which was not exactly a selling point for me.
Still, when I saw it in the theater in 1998, I found it one of the more interesting movies I had seen in a long time.  Where The Crow was all atmosphere with little payoff, Dark City endeavored to give us a good story.  It's not without its inconsistencies and flaws, and I don't really think it's meant to make us question reality or go beyond the actual story it is telling, but it definitely succeeds in doing what it sets out to do.
John Murdoch (Sewell) wakes up in a hotel room with the carved-up body of a dead hooker.  He has no idea who he is or how he got there, but he soon receives a call from Dr. Daniel Schreber (Sutherland), who seems to know what is going on.  He leaves right before the arrival of Detective Bumstead (William Hurt), the new investigator on the case as apparently his predecessor, Walenski (Colin Friels), has gone insane.
As Murdoch tries to figure out what is happening to him, he soon realizes he has a wife named Emma (Connelly) and an uncle named Karl (John Bluthal), both of whom eventually aid Bumstead in finding Murdoch.  Problem is, nothing, nor anyone, are what they seem.  Instead they, and everyone in the city, are part of an experiment run by a group of aliens aided by Schreber and led by Mr. Book (Ian Richardson).  They are concerned that Murdoch may have advanced to where he has powers similar, or even greater, than theirs.  While the humans pursue him, the alien Strangers imprint their own Mr. Hand (O'Brien) with Murdoch's manufactured memories in order to catch him.
The title city remains unnamed throughout, and does indeed remain under constant darkness, as the entire population is put to sleep every 12 hours.  We soon learn more about the Strangers and why they are doing the experiment, as well as their weaknesses.  In order to discover the secret of what it is to be human roles are constantly switched and new memories implanted, to the point that no one is who they were when originally abducted.  If one is looking for answers to how all this happened, there are none; the story is about a man waking up to what is and using his new knowledge (and powers) to change the world he must live in.
Dark City maintains Proyas's original idea for a noir science fiction story, but eventually was fleshed out by Lem Dobbs and David Goyer as it became apparent the film was going to be made and that the budget was going to be much more than originally anticipated.  This led to the Strangers being seen, and even though it is sometimes better to insinuate, the outward design of the creatures is great.  They are pale, bald and dressed in black.  The true form of the Strangers isn't nearly as frightening, and wisely not seen much; in fact, Proyas gets that out of the way early on so that it doesn't end up being a mystery with a disappointing reveal.  The mystery lies largely in figuring out their motives rather than explaining the aliens themselves.
Since everyone is largely living lives with memories implanted - even Schreber has had most of his memories erased, even though he is the one human that is still basically who he was, or at least thinks he is - it is no surprise that the characters themselves are largely shallow.  All the actors are good as one would expect, as Proyas has assembled a great cast, but Rufus Sewell is basically the reluctant savior, Jennifer Connelly the love interest, William Hurt the driven detective and Richard O'Brien the evil antagonist.  There is not really much beyond any of this, but there doesn't have to be.
Other than the true form of the Strangers, many of the effects hold up - the Strangers' underground lair, for instance, as well as the way the buildings in the city grow, shrink, appear and disappear while the population sleeps.  There are no long scientific explanations about how a lot of the technology works - it's largely controlled by a telepathic method called "tuning" - thus allowing for some things to happen that otherwise would have been viewed as simple plot convenience.  It is a good thing that Proyas doesn't try to explain to much, as the story plays out as it should.
There have been some comparisons of this movie to The Matrix, which came out a year later and even re-used some of Dark City's sets.  In this case, however, it is flesh and blood living out the simulation and, unlike the Wachowskis, Proyas was interested in just telling the story rather than filling it with religious allegories.  At this he succeeds, as it was one of the more unique and adventurous movies of the 1990s, and was never hampered by sequels that tried to stretch it beyond what it was.
Dark City (1998)
Time: 100 minutes
Starring: Rufus Sewell, Kiefer Sutherland, Jennifer Connelly, William Hurt, Richard O'Brien, Ian Richardson
Director: Alex Proyas