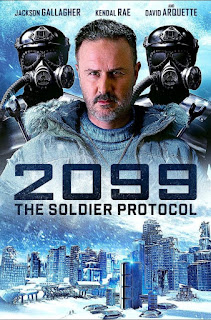 There are certain movies that, when watched, I hear the voice of Johnny Rotten in my head: "Ever get the feeling that you've been cheated?"  I know that voice should not go off in my head for a movie like 2099: The Soldier Protocol, whose blurb reads like an Asylum ripoff of Avatar, but it did.
I went into this knowing full well I was not going to be watching anything close to a good movie.  However, we have David Arquette in a thick coat, strange faceless soldiers in the background and a frozen, apocalyptic city.  I was at least hoping for goofy monsters and SyFy level silliness as Deputy Dewey fought his way through the new ice age that had engulfed the end of the 21st century.
Instead, this has nothing to do with dead cities, the year 2099, or really even David Arquette.  Instead it's an Australian film - inexplicably taking place in the United States - that was originally called The Wheel.  The lead, in fact, is Jackson Gallagher, a former Australian child actor, and Arquette's is largely a supporting role as one of the doctors in charge of the experiments that are done on him.  It does confuse me that Hulu thought a change of the name and trying to convince us that Arquette was the lead would be any sort of selling point for this film.
Matthew Alan Miller (Gallagher) is a prisoner who, after an altercation, becomes a paraplegic.  He is promised a reduction in his sentence if he participates in a program that promises to restore his ability to walk.  Reluctant at first, he decides to go with it instead of going back to prison.  Dr. Allison Turner (Kendal Rae) is brought in due to her willingness to make morally questionable decisions when it comes to experiments, and is paired with Dr. Emmett Snyder (Arquette),  Their job is to run a series of torturous experiments on Miller in order to advance their program of using nanites to heighten the fighting ability and healing quality of humans.
I have to say that Gallagher isn't bad, although he isn't given a lot to work with outside of doing some martial arts work.  Arquette is his usual unremarkable self, while Rae seems to spend most of the time gazing off into space.  The Australians have certainly learned a thing or two from Canadian science fiction on how to repurpose factories and other industrial settings into backgrounds for dystopian stories, but could still use a few more lessons in creating quality films.  This had a direct-to-video vibe about it from start to finish.
So, in essence, if you are attracted by the poster art, don't be fooled.  This is another one of those evil government/corporation doing experiments on people against their will type of films, and it isn't even a good one.
2099: The Soldier Protocol (2019)
Time: 85 minutes
Starring: Jackson Gallagher, Kendal Rae, David Arquette
Director: Dee McLachlan