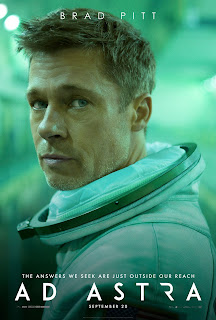 I really didn't know much about Ad Astra going into this.  I knew it was in space, I knew that it sounded like a 2001: A Space Odyssey wannabe, and, to make things worse, I knew that star Brad Pitt had talked about it being about toxic masculinity.  I guess it's a subject one can explore in a movie that warrants it, but slipping it into a science fiction movie seemed like one of the usual "get woke, go broke" actions we have seen over the last few years, where it seems that everything in a movie takes a back seat to a political agenda.  The confusing thing is that Ad Astra, if it is about toxic masculinity and any other type of leftist agenda, hides it to the point where one would think that maybe its star missed the whole point of the film.  It is at heart about a man coming to grips with issues concerning his father, and in many ways plays out like a Hallmark special.
While the movie cost just shy of $100 million - quite a bit less than a lot of preach-to-the-choir films these days - it largely bombed after its first week in the U.S., and just barely made a profit on the international market.  I would say having an agenda tacked onto it (rightfully or wrongfully) did it some harm in the U.S., but it seems the international community, not having to deal with U.S. politics, latched on to the story and the visuals. It's just that for a movie that appears to want to make profound statements it rings quite hollow.
Roy McBride (Pitt) is the son of a legendary astronaut named Clifford McBride (Tommy Lee Jones).  The elder McBride was part of a voyage called the Lima Project, which headed out to the orbit of Neptune in order to send and receive clear signals to find out of extraterrestrials in fact exist.  At some point contact is lost, and Clifford McBride thought dead.  Roy follows in his footsteps as an astronaut and is nearly killed when a sudden electrical surge hits a space antenna he is working on.
The surges are wreaking havoc across the planet and the other inhabited parts of the solar system, and it appears they may be coming from the abandoned Project Lima.  Space Command believes that Roy's father may still be alive, so they send Roy on a perilous journey to Mars to broadcast a message.  Ultimately, the mission leads to Roy making the trip to Neptune to confront his issues.
Issues are the one thing Roy has, having lost his father at 16 and since then throwing himself into a career that he doesn't exactly love, but mainly does because he thinks he has to.  It has cost him friends and relations over the years.  I guess this is where the whole toxic masculinity thing comes in, with hiding emotions and what not, but if this is one of the central themes then it is not handled well.  In truth, Brad Pitt just walks around looking sad and speaking in a monotone for most of the movie.  We have actors like Donald Sutherland and Ruth Negga also show up to play bit parts, but they amount to nothing more than plot motivators.
The comparison to Apocalypse Now and, by extension, Joseph Conrad's Heart of Darkness are blatant, although thankfully we don't have Tommy Lee Jones mumbling about snails crawling on the edge of a razor.  Instead, we have barely an ending at all, with bad editing confusing things even further and, honestly, the feeling that someone is going to pop out and say, "The true meaning of happiness was inside you all along!"  Not to mention in a film that wanted to take the science part seriously we have a scene at the end of Roy attempting to reach his ship that puts Space Leia to shame.
Not everything is bad.  James Gray, whether he intended to or not, does a good job of building the world the events take place in.  It's supposed to be approximately 100 years from now, and one of the things I admire is that it shows development not into magical realms but by using current technology as a baseline.  It also doesn't present a utopian society.  Earth may be largely at peace, but those conflicts have transferred to the moon, where different corporations are at war with each other and with legitimate armies, and where the safe parts have become tourist attractions.  The sequence when a convoy headed to a launch base on the far side of the Moon is attacked by pirates is one of the highlights of the film.  It is too bad that there was not more of this and less of people making bad decisions or sequences that moved the plot along but made no sense, logically or scientifically.
In the end there is nothing profound to Ad Astra, as much as it tries to convince the audience there is.  It is cheesy Dineyesque moralizing shoehorned into a space opera.  Gray has said that, though it takes place in space, it was never supposed to be a movie about space.  Despite that it seems to want to be the next 2001 or Interstellar, and its pacing and filming is similar, but those films had things to say.  Ad Astra, on the other hand, has about as much depth as a "very special episode" of an '80s sitcom, and many of them managed to convey the concepts much better.
Ad Astra (2019)
Time: 123 minutes
Starring: Brad Pitt, Tommy Lee Jones, Donald Sutherland, Ruth Negga
Director: James Gray