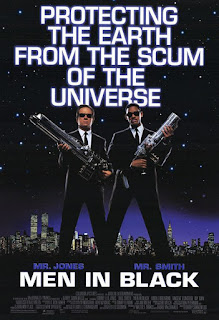 While Will Smith is still a decent box office draw there was a time when it seemed like he could do no wrong.  Bad Boys and Independence Day helped with that, although he had already had a successful hip-hop career and, of course, was the star of Fresh Prince of Bel-Air.  Tommy Lee Jones had found himself in a late career high with roles in The Fugitive, Under Siege and Natural Born Killers.  Men in Black, though by this time a Marvel property, had some independent cred due to its darkly comic story line.  Adding to that we have Barry Sonnenfeld directing, coming off of the two Addams Family movies and a hit adaptation of Elmore Leonard's Get Shorty.
The question at this point was what could go wrong.  This all sounded too good to be true in the late '90s, and it was one movie away from being such; Wild Wild West, directed by Sonnenfeld, starring Smith and based on the 1960s television show was a major disaster, as was the 2002 sequel to Men in Black.  It was amazing to watch Smith and Sonnenfeld go from gold to dirt in such a short period, but it happened, although not on such a destructive scale as other directors and actors.
For that brief time we got movies like this one, where the strangeness of the plot ultimately helps the movie.  The fact that it relies on the tried and true buddy cop formula to introduce us to this particular world is quite refreshing as well.  It isn't the first time we've been down this road; Alien Nation tried to do a science fiction twist on the genre, but Tommy Lee Jones and Will Smith click in this in a way that Mandy Patinkin and James Caan didn't.  In addition, Ed Solomon's script was a lot smarter than it needed to be for a summer popcorn flick, and there is some great animatronic and makeup work from Rick Baker that blends well with CGI that often looks good even today.
When an NYPD detective (Smith) runs down a suspect that seems to have superpowers and extra eyelids he is met with disbelief by those in charge.  That changes when an agent named Kay (Jones) arrives to talk to him about the case.  Among the things he discovers is that aliens exist, but it's not something he knows for long; Kay uses a memory wipe on him, but still gives him a business card to show up for a test.  Upon passing, he finds his identity changed to Jay, and he becomes Kay's new partner in helping to police Earth's extraterrestrial population.
Soon Kay and Jay find out that one of the worst things that could happen to the planet has - a Bug (Vincent D'Onofrio) has arrived, searching for something called the Galaxy, and a battle cruiser from the Arquillian Empire has parked itself over Earth demanding that the Galaxy be turned over to them or they will destroy the planet.  The Bug's pursuit of the Galaxy leads it to the New York City Morgue and a mortician named Laurel (Linda Fiorentino), who is also about to find out the world is not as it seems.
There are a few places where the CGI shows its age, largely when the Bug is in its true form and climbing up the towers left over from the 1964 World's Fair.  For the most part it still looks pretty good, but then a lot of the effects in the Addams Family films, made five years prior, still stand up as well.  On this one Industrial Light and Magic can be credited for helping out, as Steven Spielberg was executive producer, but Rick Baker did most of the designs and the practical effects work.  The comic tone that carries throughout the film also gives it an excuse to have some of the creatures be more cartoon-like than they would be in a more serious science fiction film.
As said before, one of the things that really makes this movie work is great chemistry between Will Smith and Tommy Lee Jones.  Their characterization doesn't really go beyond cocky young newcomer and grizzled veteran, but they own the roles in a way that immediately makes us care about the characters.  They make the roles unforgettable even if they fit all the usual buddy cop conventions.  Rip Torn appears as Zed, the head of the agency, but happily they don't go the "shouting sergeant" role with him and just go for cool authority.  Linda Fiorentino, unfortunately, is not used as much as she should be, and spends a fair amount of her time playing the damsel in distress, even if that changes by the end of the movie.  The real scene stealer is Vincent D'Onofrio, whose physical portrayal of an alien using an undersized human skin suit is a highlight of the movie.
There are so many other little details - the 1960s style arrival center for the aliens, the Flash Gordon style weapons and some humorous pondering on the nature of the multiverse - that makes Men in Black a lot more entertaining than just the straight forward plot would seem.  It has its own aesthetic, much more than many '90s films, and somehow doesn't feel as dated as I would have expected.  This far down the line the movie still fresh, fun and entertaining.
Men in Black (1997)
Time: 98 minutes
Starring: Will Smith, Tommy Lee Jones, Vincent D'Onofrio, Linda Fiorentino, Rip Torn
Director: Barry Sonnenfeld