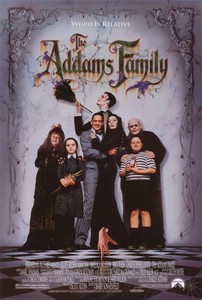 You may hear constantly about how my generation only had a few channels to watch.  Well, the generation before mine had even less, and at least whenever money was coming in we occasionally had cable.  But, even when we didn't, there was at least one or two independent stations in the market that played re-runs of I Love Lucy, The Andy Griffith Show, Gilligan's Island and on and on.

Although The Munsters took a lot of inspiration from the Universal Horror films, The Addams Family was always my favorite of the two horror-themed comedy shows.  I didn't know at the time that it was taken from a comic strip.  I just knew them as a strange family that always seemed to be playing opposite day - as well as that I was having some strange idea that Morticia may have quite a few less cooties than I suspected girls had at the time.

It has been a long time since I watched most of the series, although whenever I revisit an episode or two (usually around Halloween) I know I enjoy it even more as an adult - enough so that I will probably take some time to go through the series, faults and all.  I think I was a little more connected with the original series back at the time the movie came out, since I had many of the same problems with it at that time as I have with other television adaptations.  Like the show, however, I think the passing of the years has improved my appreciation of the movie.

Fester Addams has been out of the life of Gomez (Raul Julia) and Morticia (Anjelica Huston) for 25 years after he and Gomez had a fight.  Tully Alford (Dan Hedaya) and his wife Margaret (Dana Ivey) are invited to the annual seance to contact Fester, and accepts after noticing that Gordon (Christopher Lloyd), the son of loan shark Abigail Craven (Elizabeth Wilson), is the spitting image of Fester.  Seeing a way to pay back Abigail the money he owes as well as make a fortune for himself, they hatch a plan to pass Gordon off as Fester, having him arrive at the height of the seance.

Gomez is delighted to have his brother back, while Gordon is understandably nervous that the ruse will be easily discovered.  It pretty much is, as certain things Fester should know and ways he should behave are suspiciously absent.  In addition, the Addams' daughter Wednesday (Christina Ricci) doubts his claim to have been on vacation in the Bermuda Triangle, as it is one of her main interests.  These fears are put to rest by Abigail, under the guise of Dr. Greta Pinder-Schloss, who claims to be Fester's therapist.

While Gordon tries to discover how to get into the Addams' vault, he inadvertently becomes more attached and at home with the family, eventually helping Wednesday and Pugsley (Jimmy Workman) with their gory interpretation of Hamlet for an upcoming school play.  Abigail becomes increasingly frustrated with Gordon's reluctance to go through with the plan, while Tully finds out that Fester is actually the older brother and in fact the true owner of the mansion and the family fortune.  Armed with this knowledge, and with the help of a judge (Paul Benedict) who has long suffered as the Addams's neighbor, he has the family evicted while the trio search for the way into the vault. Meanwhile, the family attempts to deal with life among normal people - until a chance comes to take their house back.

It is hard to think that Raul Julia would be gone a few years after this movie.  He is energetic, enjoying every single bit of the role that most associated with John Astin.  He doesn't try to ape Astin's performance, but rather make it his own.  Anjelica Huston does the same.  Though PG, the two enjoy a healthy BDSM relationship that could only be carefully hinted at in the show.  It's nice to see it shine through here.  Director Barry Sonnenfeld, for his first film, wisely allowed the actors to do what they do best instead of making them just hit the expected notes.

The breakout performance that everyone remembers from this movie, of course, is Christina Ricci as Wednesday.  She delivers her lines perfectly, which is great since she is given most of the best ones.  Jimmy Workman plays Pugsley with the expected exuberance, largely to balance Wednesday's cold intelligence and detachment.

Another standout is Thing (Christopher Hart), who is given quite a few more abilities in the movie due to not having to deal with the same effects limitations as the show.  Lurch is expected to be big and grunt, and Carel Struycken seems to have that down.  Happily, Judith Malina is given quite a bit to do with Granny, making her almost as entertaining as Wednesday.

As for the others, Christopher Lloyd seems more along to pick up a paycheck, while the others are meant to be foils for the Addamses and do their job as needed.

For a PG movie, there are plenty of bondage references, hints that a good portion of the family is "selectively" bred and a feeling that the family's value of human life is quite a bit different than most.  Surprising, since a lot of money went into this, and it's strange to think that just a quarter century ago studios were willing to take chances with something like this rather than pandering to the built-in audience for nostalgia sake.

Funny and enjoyable as it is (and such a great reminder how you don't need bodily functions to carry a comedy movie), it does suffer from the fact that the plot seems to have been inserted largely as an excuse to string the movie along.  One whole segment, with Thing working an office job, feels like nothing more than a Federal Express commercial.  It also features MC Hammer's last gasp of fame as the credits run, even though it is hilarious to hear Cousin Itt (John Franklin) blasting "2 Legit 2 Quit" when he shows up for the party.