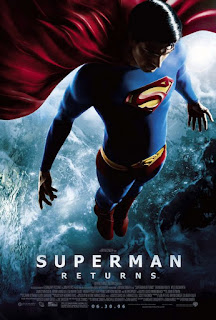 When the original Superman came out in 1978, comic books were something still largely reserved for children.  There was no real "geek culture" like there is now.  In fact, if you were still reading comic books by the time you reached high school, society didn't view it as a hobby, but rather as an example of stunted maturity.  Despite this, certain super heroes had made it into the mainstream largely on staying power, with Superman being one of the biggest.  It didn't hurt that Christopher Reeves, though his acting ranged from wooden to corny, fit Superman to a T.  In large part this was because somewhere between wooden and corny is what Superman had been all along.

The first two movies were directed by Richard Donner.  Except for a few scenes, I have always thought the first movie was overly long and definitely on the silly side.  Superman II is where the series really shined, with General Zod and Lex Luthor making a great villains and Superman having to deal with more human emotions.  It was much darker in tone, and Superman became a more well-rounded character.  Unfortunately, Donner left after number two, and the next two movies with Reeves devolved into self-parody.

Director Bryan Singer sought to remedy that.  Singer is largely responsible for the fact we have so many superhero movies right now as he was able to show that these movies could be serious grown-up entertainment when he directed the first two X-Men films.  Here he tries to do the same thing, reviving the original series with a direct sequel to Superman II.  Brandon Routh replaced the late Christopher Reeves in the title role, while Kate Bosworth took over Margot Kidder's role as Lois Lane.

At this point it has been five years since Kal-El left Earth.  Astronomers were able to locate the remains of Krypton, and Superman decided to drop his superheroing and go look for survivors of his own people.  Failing that, he returns to find that Lois Lane has moved on and Lex Luthor (Kevin Spacey), due to Superman failing to show up for the trial, was exonerated of his crimes and released.

Luthor hasn't been idle during this time.  He becomes the caretaker of the heiress to a shipping company and, upon her death, becomes the soul recipient of the fortune.  With his henchwoman Kitty Kowalski (Parker Posey) in tow, as well as a motley crew of lesser criminals, he leads an expedition to the Fortress of Solitude in the Arctic and manages to get his hands on one of the crystals that Kal-El brought with him from Krypton.  With this, Luthor discovers that the crystals can be used to regrow parts of Krypton, and he intends to do so in the middle of the Atlantic - floodling the shores of North America and Europe in the process, forcing everyone to buy land on his new continent at exorbitant prices.

Superman puts a crimp in the plan by returning and getting back to his old hero ways despite his pain at losing Lane.  Discovering Luthor's plan he sets off to stop him.  Unfortunately, Lane also stumbles upon the plan, and her and her son become Luthor's hostages and discover that not only is he planning to kill millions with his scheme, but that he has combined the crystals with kryptonite, making the new land poisonous to Superman.

Though a hit when it came out, Superman Returns has largely suffered a reputation as being a disappointment.  The planned sequels were never made and it is now largely viewed as a major blunder in Singer's career.  It was largely an anticlimax after years of attempting to reboot the character, from Nicholas Cage being rumored to playing him through a script submitted by Kevin Smith.

The truth is that the movie is really not that bad.  Kevin Spacey isn't as campy in the role of Luthor as Gene Hackman was.  He's a lot colder in his general disregard of humanity, and has only one motivation - greed.  No deep-seated psychological problems, just an urge to be as rich as possible, and damn anyone who gets in his way.

The movie stumbles, however, in a number of places. Kate Bosworth is way too young to be playing Lois Lane.  To believably be a woman (or man, for that matter) in her prominent place in journalism, late 20s is about the earliest you would find someone in her standing - more likely early to mid 30s in such a competitive industry.  Bosworth is not a bad actress, but she's not convincing as someone quite a bit older than what she really is.  She looks like an intern that is finishing up her last year of college rather than someone who was a Pulitzer Prize winning journalist who has even had time to wait five years for her boyfriend to pop back up.

The other problem is the length of the film.  I'm not going to fault Brandon Routh too much for his portrayal of the Man of Steel, but the truth is unless Superman is given something to do other than rescue people he's not the most interesting character.  Once you establish that someone is just this side of invincible then it's like playing a video game on god mode - still fun, but ultimately hollow.  This improves toward the end of the film when Superman has to contend with an entire island made of kryptonite and gets to concentrate his efforts on Lex Luthor, but a good portion of the movie is him rescuing random strangers and pining over Lane.  When you get a movie that is over two and a half hours there has to be much more substance to keep viewers interested, and in this case we get over an hour of material that could have easily been summed up in 15 minutes.  As it is, one of the major plot points of the movie doesn't even occur until within the last 45 minutes and largely loses its impact due to the fact that the follow-up films that were going to deal with it never materialized.

This is still a much better movie than the stiff and cartooney Man of Steel, which did nothing but retread the first two Richard Donner films for in a louder, flashier manner.  Despite its flaws and its unnecessary length, if the story had been allowed to continue then Superman Returns would be much better regarded.  At this point it serves as a decent sequel to the first two films, but nothing more.