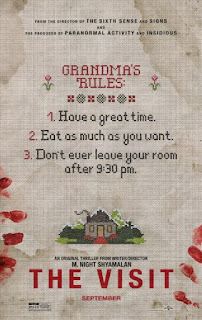 I really don't think I have to go into how much M. Night Shyamalan has become a bad punchline in movie making.  He has fallen quite a bit since The Sixth Sense, most recently before this directing the Will and Jaden Smith vehicle After Earth, which bombed spectacularly.

That movie, to Shyamalan's credit, was more the fault of the Smiths, since he was only a hired hand this time around.  He took that money and decided to see if he could start all over again with The Visit.  Instead of blowing a ton of money (and potentially having the film taken away from him again), he decided to make his own visit into the realm of found footage.  It's usually a good move, since even if the movie turns out to be horrible, the profit margin is still going to be huge.

Becca (Olivia DeJonge) and Tyler (Ed Oxenboud) are sent to spend time with their grandparents, whom they have never met, while their mother (Kathryn Hahn) goes on a cruise with her new boyfriend.  Becca sees this as an opportunity to get some redemption for her mother, who has not seen her parents since she left them a number of years prior.  Seeing the grandchildren is a step toward healing.

The kids meet Nana (Deanna Dunagan) and Pop Pop (Peter McRobbie) at the train station and settle in for their week-long stay.  Problem is, they are out of range for most of their gadgets and, grandparents being grandparents, bedtime is at 9:30 pm.  Only it turns out that grandma has a habit of wandering in her sleep and doing strange things.  The grandfather informs the kids that she experiences what is called "sundowning," where because of her dementia she happens to act up at night.

Becca tries to connect with her grandparents through her film making, only to find them strangely distant when it comes to talking about what happened with their mother.  Also, townspeople are starting to ask questions about why they haven't been around to do the counseling they normally do.  As the week goes on, things get even more frightening for the kids, and they start to realize that they may truly be in danger.

The movie itself is not bad for found footage.  Not a lot of jerky camera, although they do stretch out the reason for someone to always have a camera on them, which is always a problem with the genre.  Despite it supposedly being an amateur film, many of M. Night Shyamalan's signatures are here.  He has always been a good director.  The problem in the past has been his writing, since he really has to reach sometimes for that twist ending.

Yes, this one has a twist ending as well. You will probably guess it shortly into the movie, but I still won't give it away.  I will say that the advertising for this movie did it no favors, as it makes it seem like the grandparents are Hansel and Gretel style witches.  They're not.  This is not a supernatural horror film, but rather a suspense movie.

All four main players do well, although the kid rapping was annoying.  The good news is this is not as bad as some of Shyamalan's more recent movies, but it really offers no surprises (despite its attempts), nor does it really do anything new with the genre.  It's really just Shyamalan pushing the reset button.