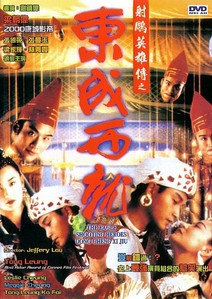 Rarely is the solution to raising money for the movie you are making, once it goes over budget, is to make another movie.  Such is the tale behind The Eagle Shooting Heroes.  Famed Hong Kong director Kar-Wai Wong was trying to finish his movie Ashes of Time, and rushed production of this one, using the same cast members, in time for the Chinese New Year celebrations.

I have not seen the other film, but both films take inspiration from Louis Cha's novel The Legend of the Condor Heroes.  In this instance, it goes for parody.  Again, I find myself at a bit of a disadvantage not knowing the source material, but this is light-hearted and strange enough to overcome that problem.

The evil Ou-yang Feng (Tony Chiu Wai Leung) and his cousin (Veronica Yip) attempt to usurp the throne of a kingdom, but the king refuses to give up the royal seal.  After being tortured, the king admits that his daughter (Brigitte Lin) has it.  Ambushed by Feng, she manages to escape on her magic horse in search of her kung-fu master in hopes of finding a way to defeat Feng.

Frustrated in his pursuit, Feng has the royal sorceress (Maggie Cheung) provide him with magic boots that allow him to fly.  However, he loses one of them and crashes, while the lost boot gets stuck in the head of a the returning master (and lover) of the Quanzhen Clan, led by Chou Po-tung (Carina Lau).  Seeing the princess remove the boot from his master's head, he and the other men of the clan pursue the princess for revenge.

Meanwhile, the princess reaches her destination, where the master pairs her with his apprentice Yao-shih (Leslie Cheung), who immediately falls in love with her, much to the chagrin of the woman he has been training with for years.  She sneaks off to kill the princess and win Yao-shih back, but runs into a beggar king named Hung Chi (Jacky Cheung), who claims to be her cousin and arranged betrothed.  She brushes him off, leading Hung Chi to attempt to kill himself.

The result of Hung Chi's suicide attempt is to survive, but only after knocking Ou-yang Feng unconscious as the latter tries to climb up from the branch he landed on.  A fight commences in which Hung Chi tries to get Feng to kill him, but Hung Chi's reflexes are too good to allow himself to be killed.  After Feng accidentally poisons himself, the two set off to town to find a doctor.

To further complicate things, the princess's fiancée, Tuan (Tony Ka Fai Leung) is told by his master that he can achieve immortality, but only by finding his true love and having them say, "I love you," three times.  He begins his search for a woman with three sixes on her chest that will prove to be the one, and breaks off his engagement with the princess.

The princess and Yao-Shih head to White Bone Cave, where the Book of Yin is hidden and protected by three monsters.  They must retrieve the book, learn the way of the Yin Kung-Fu and destroy all 9 pots in the cave in order to become invincible and win the kingdom back.  Problem is, Feng is also after the book and, after a fateful night spent at the inn, all parties arrive at the cave.  Feng is able to trick the monsters into turning the book over to him, and returns to the palace to put his knowledge to use.

To defeat Feng and save the kingdom the rest of the heroes must band together and use their combined skills.  Even that may turn out to not be sufficient - but they also may have some help from an unexpected source.

This is a quick-moving film ensemble film that doesn't spend a lot of time belaboring the plot, but instead provides a number of great comedic action sequences that are choreographed by Sammo Hung.  Since it is parody, they really amp up the ridiculousness that can come from wire fighting sequences and the mystic mumbo-jumbo used to justify it.  Almost everything is "mystical," "heavenly" or "magic," and most of it has hilarious results.  For instance, one move called "Three Flowers Bloom" reverses time and space - unfortunate for Tuan, who is at the time trying to relieve himself.

There are musical sequences, gender-bending, jokes of questionable taste and garish colors all over.  I loved it, even though I'm sure there was quite a bit that I missed since I am not familiar with the actual work which they are satirizing.  As a person who loves Hong Kong action films, this doesn't matter so much.  Many of the conventions they make fun of are a part of the Wuxia genre, so it still works.